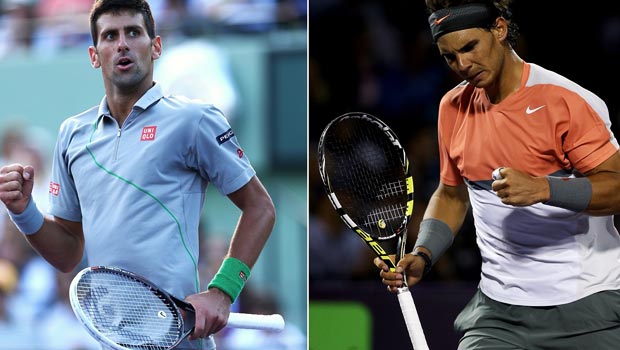 Novak Djokovic and Rafael Nadal will meet for the first time this year in the final of the Sony Open after both players were given walkovers in their semi-finals.

The world’s top two players looked like they were in for tricky last-four encounters after being paired with Kei Nishikori and Tomas Berdych respectively, only for both of their opponents to with withdraw.

20th seed Nishikori, who had beaten Roger Federer and David Ferrer in the two previous rounds, was scheduled to take on Djokovic but was advised by his medical team to forfeit due to a groin injury.

Nadal was also given a surprise day off after Tomas Berdych pulled out of their match citing gastroenteritis.

It means the pair will now face off for the 40th time in Sunday’s final in Miami, with Nadal leading the head-to-head record 22-17 but having lost their last two meetings, the most recent of which took place at the ATP World Tour Finals.

It will be the second time the pair have contested the Sony Open final, Djokovic having won the previous encounter in 2011 in three sets.

Djokovic, who is aiming to complete an Indian Wells-Sony Open double, says it isn’t always to a player’s advantage to be given a walkover, the Serb having advanced to round four in Miami without hitting a ball after Florian Mayer’s withdraw.

“I practised today, 30-40 minutes on centre court, got good rhythm and trying to keep up with what I have been doing.
“I won in Indian Wells, which gave me a lot of confidence. I’ve played a lot of matches so hopefully it will pay off.”

While the top two in the men’s game are set to meet on Sunday, the players ranked numbers one and two in women’s tennis will face off in Saturday’s final.

World number one and defending champion Serena Williams will face Li Na in the women’s Sony Open final, with the American 1.62 to win in straight sets.