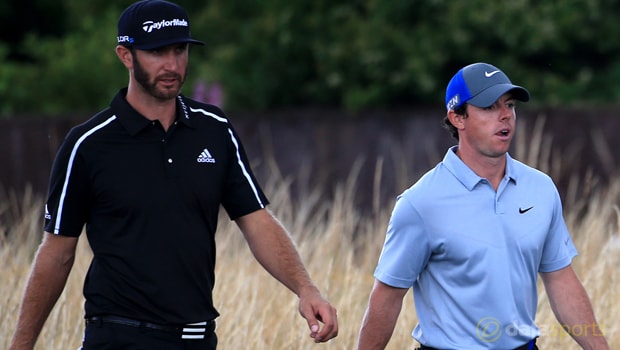 World number one Dustin Johnson will play alongside four-time major winner Rory McIlroy and 2011 Masters champion Charl Schwartzel for the first two days of the Open.

The 146th edition of the tournament returns to Royal Birkdale for the first time since 2008 and Irishman Padraig Harrington (34) will be hoping for a repeat performance, having triumphed at the venue seven years ago.

The 1998 champion Mark O’Meara will kick off proceedings at 6.35am, with Chris Wood and Ryan Moore completing the first three-ball, whilst Danny Willett, Soren Kjeldsen and Billy Horschel get underway just under an hour later.

One of the marquee groups will tee-off at 2.48pm, with Johnson (13), McIlroy and Schwartzel (67) all playing together in a three-ball that is expected to draw in huge crowds over the opening two days.

McIlroy, who is 17.00 to lift the Claret Jug for a second time, heads into the event on the back of two successive missed cuts at the Irish Open and Scottish Open.

DJ has also failed to make the weekend’s play in his last two events whilst Schwartzel has not played since missing the US Open cut.

Defending champion Henrik Stenson, a 23.00 chance to retain his crown, is joined by American Jordan Spieth (15) and South Korea’s Si Woo Kim at 9.47am while Masters champion Sergio Garcia (17) starts at 1.04pm alongside Australian Jason Day and 2015 champion Zach Johnson (81).

Spaniard Jon Rahm (17), who triumphed at the Irish Open last time out, has been grouped with USA’s Patrick Reed and Englishman Lee Westwood, who is 67.00 to win the tournament and break his major duck.

American Rickie Fowler, who is 15.00 to win his maiden major, is in a three-ball, teeing off at 1.26pm, alongside Aussie Adam Scott and England’s Paul Casey.