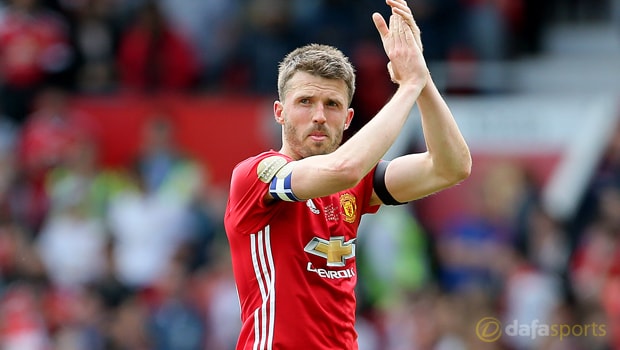 Lukaku recently made the switch to the 20-time English champions from Everton for an initial £75million and the striker made his first appearance for his new employers in a friendly against LA Galaxy.

The Belgium international had a good goalscoring record with the Toffees, having bagged 68 goals from 141 Premier League appearances, and he will be hoping to continue that fine form with the Red Devils.

Zlatan Ibrahimovic’s departure has added to the pressure on the 24-year-old striker’s shoulders although both Marcus Rashford and Anthony Martial will be pushing for a starting role up-front.

Carrick knows all about the pressure of being a big-money signing, having made the switch from Tottenham to United for £18.6m in 2006 and being branded as Roy Keane’s replacement.

The ex-England international has warned Lukaku the step-up from Everton will be a big one but the skipper is confident his new team-mate has the ability to handle whatever comes his way.

“The jump is massive,” Carrick told The Guardian.

“I found that myself coming from Tottenham. It’s a massive jump. You can’t really explain to people until they’ve gone through it.

“I’m sure he’ll find the same. But having Premier League experience is a massive bonus.

He’ll know how things work week to week. It’s just about dealing with the pressure.”

United are 4.33 second-favourites to win the Premier League this season whilst rivals Manchester City, who have been spending heavy this summer, are leading the market at 2.88.