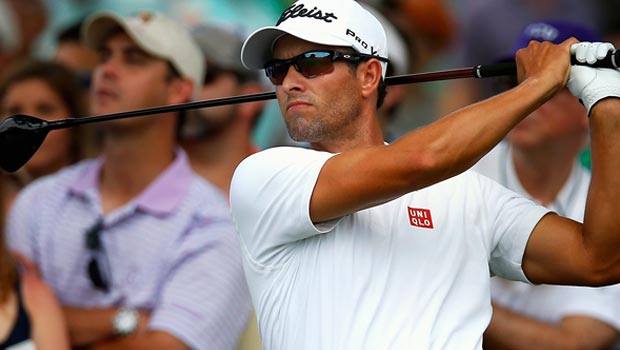 Adam Scott is off the pace after a string of bogeys during his first round as the new world number one at the Crowne Plaza Invitational in Fort Worth, Texas.

The Australian started on the back nine and dropped shots on four of his opening nine holes before turning things around with three birdies to sign for a one-over par round of 71.

Despite sitting six shots behind leader Dustin Johnson, Scott was able to look on the bright side after recovering from his awful start.

“I thought I actually hit plenty of good shots and played from the fairway for four over, so it wasn’t ideal,” Scott told the PGA Tour website.

“But I managed to tighten up on the back and make a couple of putts.

“I can’t say I found my rhythm shooting 4 over, but I felt like everything was in a good spot. I just have to be a little patient, and I think sometimes on a course like this, you need to be.

“Even with a short iron or a wedge in your hand, you can’t force it because bogeys are easy to come by.”

Leader Johnson recorded a bogey-free round of 65, picking up four shots on the opening nine holes before playing a steady back nine to sit one shot clear of a trio of fellow Americans.

Hunter Mahan set a blistering pace to make the turn in 29, six under par, before losing momentum and making a double-bogey on the 18th hole to gift an outright first-round lead to Johnson.

Tim Wilkinson, Robert Streb and Harris English joined Mahan on 66, with FedExCup leader Jimmy Walker, Jason Duffner and Jordan Spieth in a group tied for sixth on 67 behind.

Johnson is 5.00 with dafabet to go on and win the event with Any Other Player, which includes Wilkinson, Streb and English, the current 2.50 favourite in the Crowne Plaza Invitational (Winner) market.

>Of the players two-shots off the pace, Walker is 13.00, Dufner 17.00 and Spieth 9.00 to finish on Sunday with the winner’s trophy and prize money cheque.