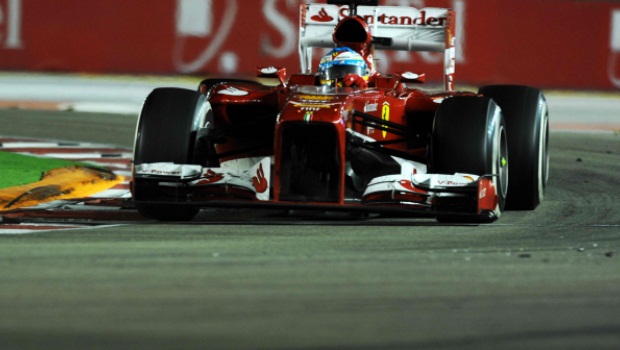 Fernando Alonso conceded that Ferrari is no match for Red Bull at present as he once again failed to stop Sebastian Vettel in Singapore.

Vettel dominated from start to finish in the Singapore Grand Prix, with Alonso and the rest in his slipstream for the third race in a row, causing Alonso to concede that the Formula One World Title race is all but over, with the German holding a lead of 60 points over his nearest rival.

Alonso was pleased to have filled second place on the podium, given that his car was two seconds slower then the Red Bull machine.

“We have to be realistic, few races to go already and the gap is still increasing every weekend and is now 60 points. We need to be honest with ourselves,” Alonso said.

“We need a lot of luck. We don’t need it just in Korea, we need luck in Korea, Japan, India, Abu Dhabi. We need luck every weekend as we are one second off the pace.

“The best one wins and we are not the best ones at the moment and we will keep working.”

Having virtually conceded that Red Bull will prevail this season, Alonso cannot wait for 2014 when a host of technical changes will hopefully make a for a more level playing field.

“We start from zero next year, completely from zero, a big change in regulations, so it is our best opportunity to close the gap,” said the Spaniard.

“We will put all our effort in to 2014 hopes as that is our best opportunity to close the gap with the top teams.”

The tyres as ever will be a major factor, and it was the Spaniard’s ability to manage the Pirelli wheels in Singapore that took him into second place.

“We didn’t know exactly how long the tyres would survive, we were maybe not expecting that long but we are 60 points behind the championship – if it works ‘OK’, if it doesn’t work maybe we don’t finish second we finish fourth or fifth and it is nothing really,” he said.

“We were again too slow this weekend we were not at a level we should be, so we tried different things and it paid off at the end with a fantastic second place for us which tastes like a victory.”

Vettel will though once again be favourite to top the podium when the Korean Grand Prix gets under way on October 6.