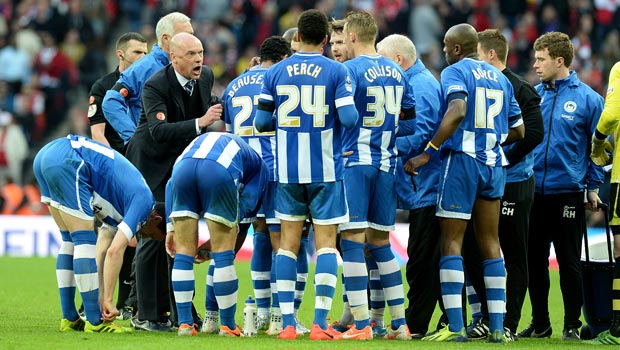 Wigan boss Uwe Rosler expects his players to put in a top performance under pressure against Birmingham City with two games remaining to secure a Championship Play-off place.

The Latics need to secure three more points to ensure they finish in the top six in what will be their 59th competitive match of the season, but Rosler believes the physical aspect of playing so often will not have as big a part to play as most people make out.

And Rosler believes his side have got the preferred type of pressure, against Birmingham’s relegation worries, heading into the game and are ready for the mental battle.

“We’re all looking forward to the game and there’s a great spirit in the camp that we are going to achieve what we’re setting out to do,”
he said.

“There is pressure in the game and it will count for something for either team in the end, but in terms of form going into the game, we are at the stage of the season when it doesn’t really mean much.

“Nobody is looking at the previous six games or six months, as managers we have to select the group of players with the ability and the mental strength to perform on the day.”

Wigan have lost three of their last four Championship fixtures, including home defeats to relegation-threatened Millwall and Blackpool, but Rosler believes they can rise to the occasion on Tuesday night.

“I’m asking my players to put in a top performance and it’s all about who can perform under the pressure,” he added.

“At this stage of the season the physical demands on players are the same for every team.

“Now is the time to fight through mental pain barriers to accomplish our aims, and I have a very good group of players who are capable of doing so.”