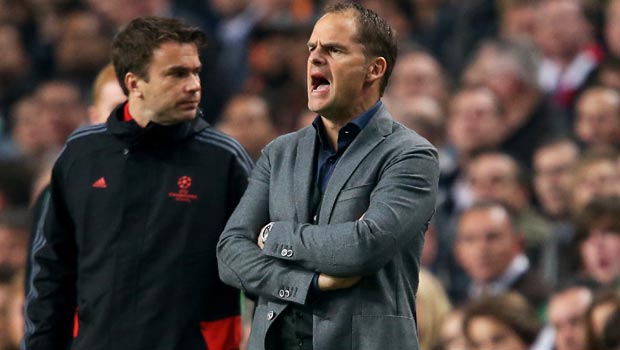 Ajax boss Frank de Boer has claimed Tottenham have approached the Dutch club as they look to replace Tim Sherwood at the end of the Premier League season.

Sherwood was given an 18-month contract at White Hart Lane, but after missing out on Champions League football he looks set to leave.

Tottenham have actively been looking for a new boss, with plenty of high-profile names linked to the vacant role. Louis van Gaal was the first as he prepares to leave his role as Holland boss, although he has recently been linked with Manchester United.

However, De Boer now claims Spurs have made contact, something which the Premier League club have denied.

The 43-year-old saw his side clinch the Eredivisie title at the weekend and he has admitted he is interested in speaking to Spurs, despite remaining fully focused on his role in Holland until the end of the season.

He said: “Spurs have made an approach. I’m going to listen and talk. Then I’ll make my feelings known.

“At this moment I have had absolutely no contact with other clubs. I’ve said to (director of football) Marc Overmars that until May 3 I’m not going to think about it – I’m busy with Ajax.

“I know that Tottenham are a beautiful club with a beautiful history. I want to add something to a club, so that people can say that they see the hand of Frank de Boer.

“Liverpool are a good example of this with Brendan Rodgers.”

Despite the speculation, Sherwood will be preparing his squad for this Saturday’s game against West Ham.