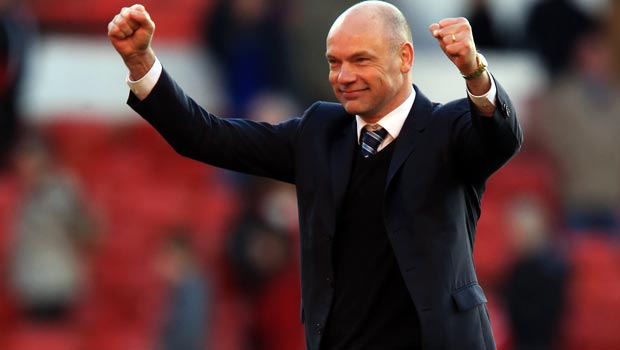 Wigan boss Uwe Rosler says he was impressed with his side’s performance after earning a 2-2 draw with league leaders Leicester, who he believes are guaranteed top-flight football next term.

The Latics have shown a marked improvement in performances since the German took charge on December 12, following the dismissal of former boss Owen Coyle.

His side once again raised the bar against the Foxes, who haven’t lost in the league since falling at the hands of Brighton on December 7.

Rosler’s men twice led at the DW Stadium through goals from Ivan Ramis and Rob Kiernan but the top side in the division battled back courtesy of strikes from Andy King and Dean Hammond.

The former Brentford boss said: “That was one of the best games that I’ve seen in the Championship this season, I think two quality teams played each other and both were here to win.

“I felt that the intensity and the tempo was very high. One of the reasons why Leicester are up there is they play a very high pressing game. They are an intense, very fit team and we matched that today over 90 minutes.”

Since dropping out the Europa League in the group stages, the Lancashire club have climbed the Championship ladder and find themselves rooted firmly in the play-offs in fifth, with a six point cushion over seventh-placed Nottingham Forest.

The 45-year-old is confident that his side will secure a top six finish and he believes that Nigel Pearson’s squad will certainly earn promotion this time round, extending their lead over second placed Burnley to seven points with the draw at the DW Stadium.

He continued: “There’s no question in my mind that Leicester will go up. I think if we continue like this, we will end up in the playoffs.”