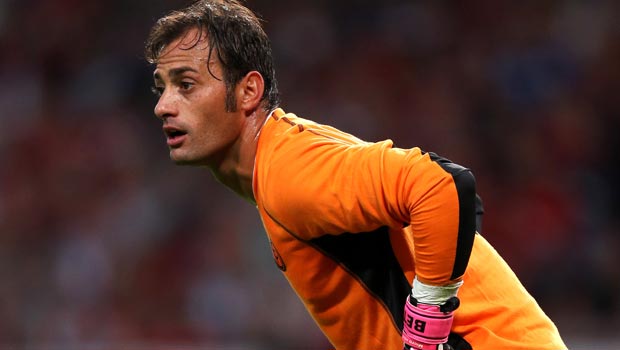 Sevilla goalkeeper Beto admits that he is looking forward to facing his former club Porto in the Europa League on Thursday but expects plenty of work.

Beto joined Sevilla on loan in January 2013 as a replacement for Diego Lopez, who was drafted in by Real Madrid for the injured Iker Casillas at the time.

The Portuguese impressed enough to secure a permanent deal in the summer and has quickly established himself as a fan’s favourite with a string of impressive performances.

The 31-year-old spent two seasons with Porto – who are priced at 7.00 to win the tournament outright – and was on the bench as back-up for Helton in the Europa League final victory over Braga in 2011 and he insists that he is looking forward to a reunion.

Beto said: “I have mixed feelings. On the one hand I’m happy because I will return to a club I can relate to a lot and for whom I have a lot of respect and love. But on the other hand I didn’t want to face them because they are a very tough opponent.”

Unai Emery’s side pulled off a dramatic comeback in the last-16 of the competition to find a way past local rivals Real Betis after trailing
2-0 from the first leg at the Ramon Sanchez Pizjuan.

Los Rojiblancos levelled the score with goals from Jose Antonio Reyes and Carlos Bacca before winning the match on penalties.

The Portugal international insists that the turnaround gave the squad a huge boost in terms of confidence as they prepare to take on Porto, who knocked out Sevilla in the last-32 stage of this tournament in 2011.

He added: “We were at a serious disadvantage going into the second game but just when everyone doubted us, we gave the appropriate response. This team has a lot of heart.

“I’m happy for myself, for Sevilla, for my team-mates – even my mother, my father and my son!”