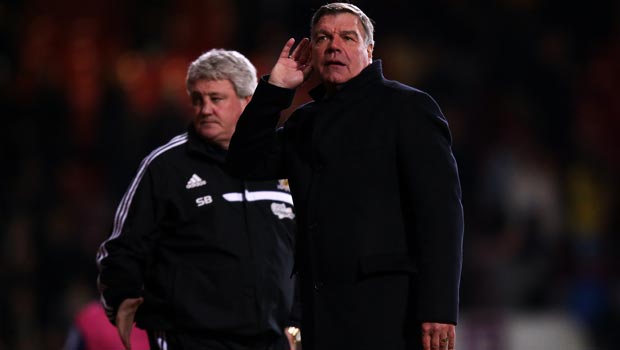 Questioning fans is always a rocky road for football managers to go down and Sam Allardyce’s comments after West Ham’s limp 2-1 win over Hull City on Wednesday night are hardly going to endear him to the Hammers’ faithful.

Yes, West Ham won and yes, they are now as good as safe from relegation, but to see a side played off the park by an average team down to 10 men was too hard for most east Londoners to stomach.

To hear boos ringing out at the Boleyn at the final whistle might seem strange to Allardyce, and to others, but to West Ham fans the performance was just another example of how the culture of the club is being eroded.

Most Hammers fans tolerated the years of near-misses and glorious failure, interspersed (very briefly) with the odd piece of silverware heading their way, because of the attractive style of football passed (yes, passed Sam) down through the generations.

This culture was always underpinned by a creative midfielder of the ilk of Trevor Brooking, Alan Devonshire, Ian Bishop…the list goes on.

But who, in this team of Allardyce artisans, is capable of putting their foot on the ball and threading a killer pass or finding a man 50 yards away in space?

Mark Noble is a fine servant and long may he stay in claret and blue, but he is a midfield dynamo, always snapping at the heels of opponents, rather than a cultured footballer.

When West Ham move away from Upton Park and into the Olympic Stadium they will have lost the two things that marked them out from the rest, and will be just another mid-to-low table ranking team of plodders, who can pull off the occasional good result (3-0 away to Spurs, for example).

Gone will be the famous atmosphere generated by Wednesday nights under the lights, that so intimidated the opposition – and their fans, and so will the club’s reputation as ‘the academy of football’.

Allardyce may well be cupping his hand to his ears then, in a bid to hear any noise at all.