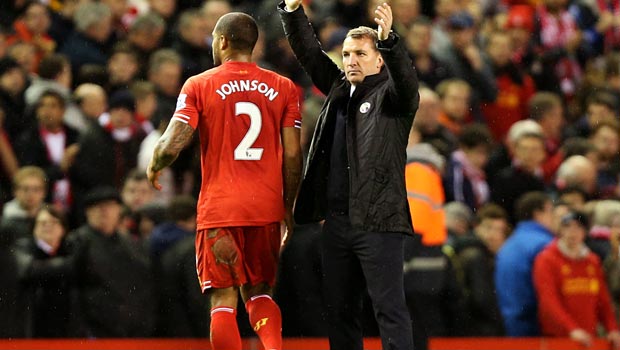 Liverpool boss Brendan Rodgers continues to play a brilliant hand when it comes to understating his side’s title chances.

For such an inexperienced Premier League manager the Northern Irishman has conducted himself admirably in the business end of the season.

And even after seeing his side make it seven wins on the bounce with a 2-1 victory over Sunderland on Wednesday night he refused to get carried away.

That victory – earned by a Steven Gerrard free-kick and Daniel Sturridge’s 30th goal of the season, moved the Reds above Manchester City to second in the table.

Liverpool are now one point behind leaders Chelsea, who have played the same amount of games (31), and two points clear of a City side with two games in hand on their rivals.

“It’s up to other teams to lose, so we will keep working hard,”

Rodgers said when asked about Liverpool’s chances of winning their first league title since 1990.

“I’m not playing it down; I don’t play silly mind games. If City win their games, they win. It’s simple maths.”

To the frustration of many a post-match interviewer, Rodgers has consistently focused on continued improvement in performance rather than outcome and results.

However, he has finally conceded that Liverpool were now in the title race.

“Manchester City have games in hand and the squad to win the title and the Champions League, Chelsea likewise, but we are enjoying being up there.

“We are second; I’m not going to say we are not in it because I’d be lying.”

With home games against both their title rivals to come – they host City on April 13 and Chelsea a fortnight later – there is still chance for Liverpool to make up lost ground.