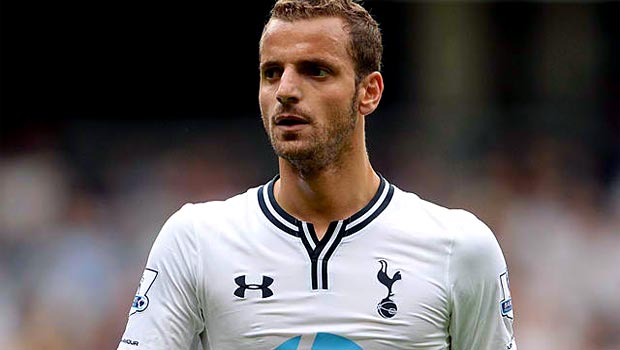 Tottenham boss Andre Villas-Boas says Roberto Solado’s hat-trick in 4-1 Europa League win over Anzhi Makhachkala may not be enough to secure him a starting berth against Liverpool.

The Spaniard had found himself on the bench for the last two Premier League matches, having struggled in front of goal since joining Spurs for £26million from Valencia in the summer.

Jermain Defoe had been given the nod in the games with Fulham and Sunderland, but Soldado was back in the team on Thursday for the final match in the Europa League group stages.

The striker has faced criticism in recent weeks for his lack of goals, but was able to silence those doubters with a fine performance against Anzhi, scoring his first goals from open play at White Hart Lane in the comfortable win.

Soldado’s hat-trick takes him to nine goals since joining Tottenham, but it may not be enough to dislodge Defoe from the starting XI for Sunday’s game with Liverpool, according to his manager.

“We have to think about it,” said Villas-Boas of Soldado’s chances.

“It’s a bit premature. We always wanted to give this game to Roberto after two games in a row for Jermain Defoe.

“Jermain was deserving of his chance as well. Now it’s about putting the best possible strategy of the game and seeing what we can do.

“What this will help is put the player back with confidence with his final touch and a striker always lives off goals so it’s extremely important.”

Thursday’s win over Anzhi saw Tottenham qualify for the last 32 of the Europa League with a 100 per cent record and stretches their unbeaten run in all competitions to five matches.