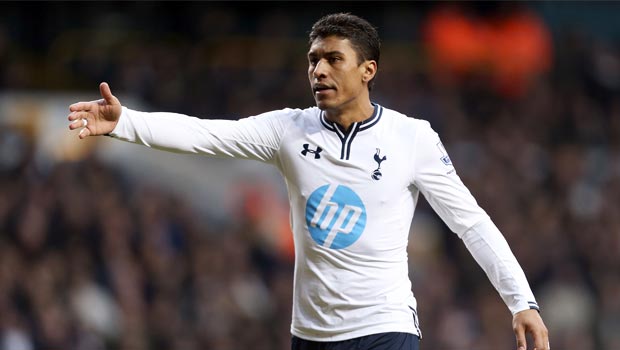 Paulinho has stressed that he aims to be a success with Tottenham in the Premier League despite enduring a difficult debut campaign at White Hart Lane.

The 25-year-old Brazil midfielder was one of the big-money recruits drafted in by former boss Andre Villas-Boas last summer as he looked to build a successful side from the world record £85million transfer fee received from Real Madrid for Gareth Bale.

However, Paulinho, who cost Spurs around £17million when making the move from Corinthians, struggled for consistency and was only a bit-part player under Tim Sherwood when he replaced Villas-Boas in the managerial hot seat in late December.

It was reported that Paulinho was looking to secure a January move away from Spurs to ensure his chances of making it into Brazil’s 23-man World Cup squad for this summer’s tournament in his home country.

But the player is adamant that he did not shirk the challenge of fighting for a place in the team and, having secured his spot in Luiz Felipe Scolari’s squad, he is now happy to stay put with the north Londoners who are still waiting to appoint a managerial successor to Sherwood.

He told Globo Esporte: “I was on bench for a period, but I never considered returning to Brazil.

“It’s complicated for a player when he goes to Europe, you have to be strong.

“I went through complicated situations in Lithuania and Poland and returned to Brazil.”

Paulinho added: “Of course I did talk with my agent, it’s normal when you are upset.

“But the talk of returning to Brazil never existed, it never crossed my mind.”

Paulinho’s Brazil are 3.80 favourites to win the World Cup in front of their own fans this summer.