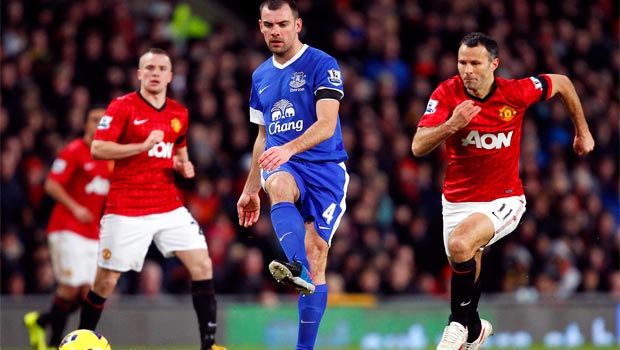 Everton travel to Old Trafford on Wednesday in confident mood as they look to stay above Manchester United in the Premier League table.

The Blues lie in fifth place at present with 24 points while United are down in eighth, but just two points behind the Merseysiders.

There will be much focus on the two managers in what is always a lively encounter, as Roberto Martinez has stepped into the shoes of David Moyes since the latter made the short journey along the A580 to take over from Sir Alex Ferguson.

Moyes did not get off to the best of starts but United are now on a 12-match unbeaten run, with Wayne Rooney looking more like his old self.

However, Everton themselves have lost just once in their last 13 outings and showed in Saturday’s 4-0 hammering of Stoke that morale in the camp is good.

They would be fourth now had it not been for Daniel Sturridge’s late equaliser in the 3-3 draw in the Merseyside derby at Goodison Park.

Former Wigan boss Martinez has quickly got Everton playing the way he wants, and they have only lost once so far in the Premier League.

However, they face a big week as after Wednesday’s high-profile encounter there is yet another one to come when they travel to the Emirates to face league leaders Arsenal.

Martinez knows he cannot stress to the players just how big the next few days could be in terms of Everton’s season.

“It would be very easy for me to play it down but we are going to go to Old Trafford and the Emirates,” he said.

“They are games that we are not expected to win but, clearly, if we want to achieve something special, we need to be able to break the mentality of going to the big grounds and getting some wins.

“Over the last 10 years, we have not beaten Arsenal, Manchester United, Chelsea and Liverpool at their grounds and we need to address that. We need to make sure we are ourselves.”

As boss of Wigan, Martinez masterminded victories over the Gunners and also the likes of Chelsea and Liverpool, mainly due to the old mantra that attack is the best form of defence, and a similar approach by his Everton side may see them emerge at the end of this week still in contention for a Champions League place.