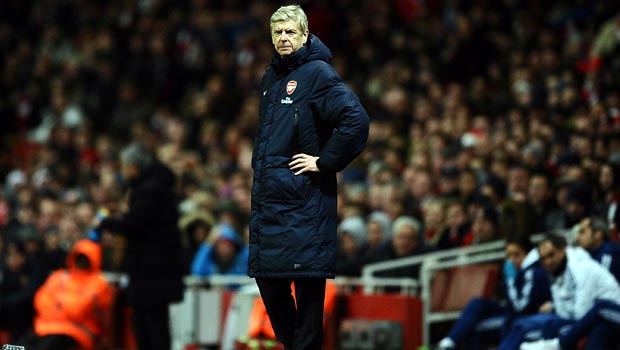 Arsene Wenger claims Arsenal’s doubters will only be silenced if they can maintain their good start and win a first Premier League title in nine years this season.

The Gunners’ chief was speaking out ahead of Monday night’s eagerly-anticipated London derby against expected championship rivals Chelsea at the Emirates Stadium with his side dropping from first to third in the table following respective weekend wins for Liverpool and Manchester City.

Wenger accepts that questions are already being asked about their title credentials as they crashed to a 6-3 defeat at Manchester City just over a week ago and have now let slip a five-point lead. And they could be down in fourth for Christmas if Chelsea take the three points from Monday’s tussle.

Wenger, who has never got the better of Chelsea boss Jose Mourinho in nine previous head-to-heads between their respective teams, claims outsiders will now only give them credit if they can last the distance in a title race.

When asked if people were right to question Arsenal, who have also failed to win a trophy of any note in nine seasons, Wenger said: “Yes – we haven’t won the league for a long time, so that is why they question us. It is not (about nine seasons) without winning a trophy, it is without winning the Premier League.

“If you win the League Cup, it does not change anything. It is the Premier League that is the most important thing, and we haven’t won it for nine years.”

Wenger does believe his current squad has the strength of character to maintain a challenge until the end of the season.

He added: “It adds pressure, but you cannot play in the Premier League without pressure. There are periods where the pressure is a bit bigger and periods where it is smaller. You have to live with that and resist that kind of stress.”