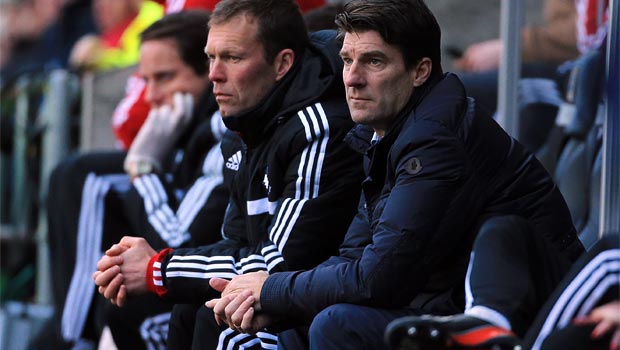 Swansea chairman Huw Jenkins has dismissed suggestions Michael Laudrup’s position as manager at the club is under threat.

The Swans remain in danger of being relegated following another disappointing defeat, this time at the hands of fellow strugglers West Ham at the weekend.

Reports had claimed that some board members wanted to axe Laudrup and that talks over the Dane’s future had taken place with Jenkins after the Hammers defeat.

However, Jenkins has denied the rumours and says such stories are only emerging because Swansea are having a tough time at the moment.

“I haven’t heard anything in reference to Michael and neither have we met, or discussed, or done anything about Michael,” said Jenkins.

“A couple of us did actually meet up on Sunday morning to have a cup of coffee like we normally do. That’s as simple as it was. That’s where the first rumour came from.

“It’s difficult for me to say anything because there isn’t anything to discuss.”

Swansea go into this weekend’s South Wales derby clash against Cardiff, who are second bottom, just three points ahead of the Bluebirds and a good result is needed to help dispel the rumours.

“The bigger picture as always is winning a Premier League match and it so happens this week we are playing Cardiff,” Jenkins said. “Winning the match, I can assure you, is the most important thing for both teams.

“When you end up losing matches, when everything is so tight at the bottom of the Premier League, you get rumours and you get stories. We have had them for many weeks.

“If we win everything is fine. If we lose it’s not.”