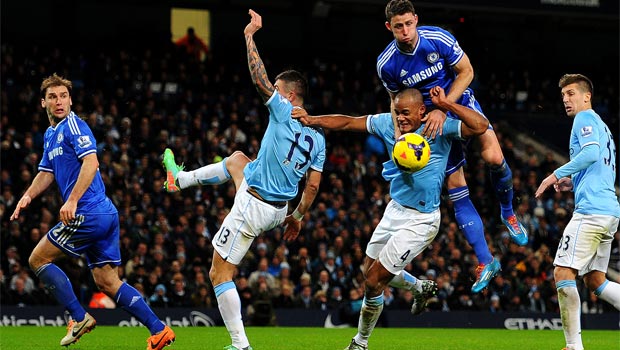 Manchester City boss Manuel Pellegrini was left to rue his side’s missed chances as they were beaten 1-0 at home by Chelsea on Monday night.

Pellegrini’s side had 25 shots at the Etihad Stadium, but could only hit three of those on target within the 90 minutes.

Jose Mourinho’s side were clinical when given the opportunity, hitting six shots on target as well as finding the woodwork on three occasions.

Chelsea’s Branislav Ivanovic scored the only goal of the game, but City could have scored late on with David Silva and Stevan Jovetic both going close.

Pellegrini was keen to point out that his side were missing key players, but he was still disappointed to miss so many chances.

He told Sky Sports: “We had clear chances to score at least two goals but didn’t do it, and they had two or three shots against the post.

“It was a very close game to play against Chelsea without [Sergio] Aguero and Fernandinho.

“It’s important to note that we were missing them, also Nasri and Javi Garcia. We had to change the midfield.

“It was an important game but we’ll continue and we’ll see. We’re just two points behind Arsenal.”

City will now be looking to bounce back from the defeat by inflicting revenge on Norwich when they travel to Carrow Road on Sunday.

They are heavy favourites at odds of 1.34, while Norwich can be backed at 7.88 as Chris Hughton’s men look to return to winning ways.