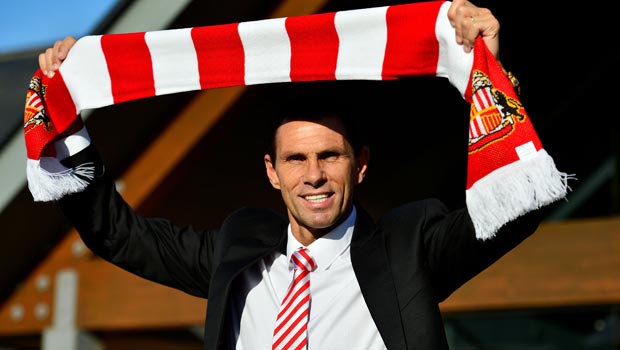 Sunderland boss Gus Poyet has turned his attention to helping the club grow after signing a new deal through until 2016.

The Uruguayan managed to pull off a miracle in keeping the club in the Premier League during his first nine months in charge.

Poyet also guided the Black Cats to the Capital One Cup final where they were beaten 3-1 by Manchester City at Wembley.

His style of play and tactics eventually paid off as his side battled back in the final few weeks to send Cardiff, Fulham and Norwich down.

With Southampton reportedly interested in his services, the club reacted quickly to tie him to a new deal with Mauricio Taricco, Charlie Oatway, Andy Beasley and Antonio Pintus also staying on Wearside to work alongside him.

“I am delighted to extend my stay with Sunderland AFC, after an unbelievable season and our famous great escape,” Poyet said.

“Stability is absolutely key to long-term and sustained success for any football club, and this new contract gives both the club and me that stability going forward.

“Now it’s a different challenge for me and the club and I am relishing the next stage with Sunderland. We achieved so much last season, working together – the club and the fans – and we took many good memories from the season.

“The prospect of creating more of those memories is one which excites me, and now I cannot wait for the next chapter in my career and the history of Sunderland AFC.”