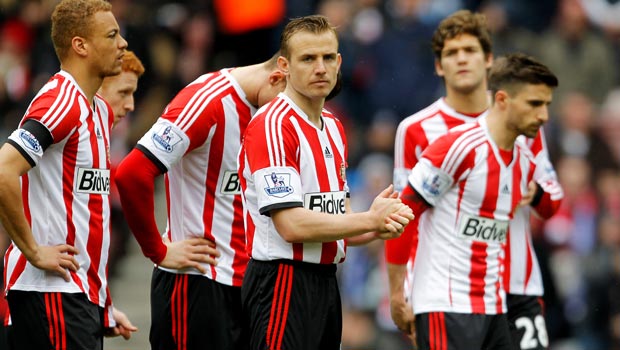 Lee Cattermole has warned his Sunderland team-mates they have achieved nothing yet after Saturday’s shock 2-1 win at Chelsea boosted their Premier League survival hopes.

The combative midfielder has played a key role in the Black Cats’
successful past week in which they followed up a creditable 2-2 draw at Manchester City by condemning Chelsea boss Jose Mourinho to his first defeat in 78 league games at Stamford Bridge.

However Gus Poyet’s side remain at the bottom of the Premier League table, three points off safety with four games left to play.

Therefore Cattermole insisted that the players need to refocus on their remaining matches, starting with a massive relegation six-pointer against third-bottom Cardiff City at the Stadium of Light on Sunday lunchtime.

“We had a celebration in the dressing room, but it probably lasted for about a minute and then we pulled ourselves back together and said, ‘This isn’t finished yet’,” Cattermole said.

“As a group, I think we all recognised straight away that the hard work has to start here.”

Sunderland are 1.90 to secure a second successive win against Cardiff this weekend, while the Bluebirds are 3.57 to boost their own survival hopes by taking the three points and the draw is 3.41.

Following Sunday’s massive clash, Sunderland then travel to Manchester United before completing the season with successive home games against West Brom and Swansea.

The Black Cats, who currently have a better goal difference than their immediate relegation rivals, are currently priced at 1.90 to go down this season, with Cardiff at 1.16, Norwich at 1.21 and Fulham at 1.55,