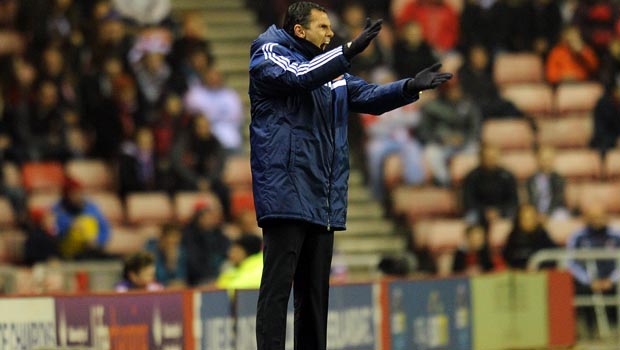 The Black Cats battled hard at the Stadium of Light but poor defending cost them again as Hammers striker Andy Carroll and midfielder Mohamed Diame put the visitors in control with goals at the start of each half.

Adam Johnson reduced the deficit after coming on as a second-half substitute but Poyet’s side could not find an equaliser and are now facing an uphill struggle to survive in the Premier League with eight games left to play.

The Sunderland boss told Sky Sports: “It’s difficult to accept, sometimes when you see a team at the bottom they have no spirit, heart and give up.

“I don’t think it’s possible to see my team giving up.

“But if you see my team giving up before the end of the season, you won’t see me here.

“The downside of the game (is the defending) and we knew that was the way they could hurt us. We will have a few chats about that.”

Poyet bemoaned his side’s bad luck and felt Sunderland had been worthy of a penalty when West Ham midfielder Kevin Nolan appeared to elbow the ball in the box late in the first half when the score was only 1-0.

“It was clear, deliberate. He tried to play the ball with his hand,” said Poyet.

“You would need to ask the referee. It was easy to see but that’s the way it’s been.

“I hope we get some luck – a decision from the ref or a deflected shot goes in.”

But the Uruguayan manager is facing criticism from the Sunderland faithful for not starting Johnson for the second consecutive match.

The winger came off the bench to score a superb goal against West Ham just days after sparking a second-half revival against Liverpool at Anfield that almost earned the Black Cats a point.