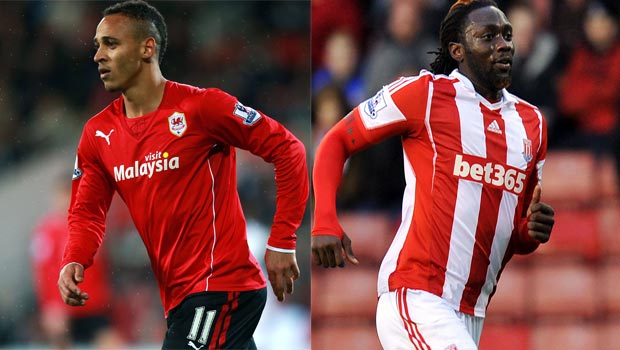 Stoke City have announced the signing of Peter Odemwingie from Premier League rivals Cardiff, with Kenwyne Jones moving the other way as part of the deal.

Potters boss Mark Hughes has been desperate to add more firepower to his shot-shy squad and believes that Odemwingie has what it takes to help fire the club up the table between now and the end of the season.

Odemwingie has penned an 18-month deal at the Britannia Stadium and is expected to go straight into the squad that takes on Sunderland at the Stadium of Light on Wednesday night.

The Nigerian forward lost his way a little after joining Cardiff from West Brom in the summer but Hughes is confident he will be able to rediscover his best form under his guidance.

“We’re delighted to have signed Peter,” he revealed. “Things haven’t perhaps gone as well for him at Cardiff as he would have hoped and he’s really keen to start afresh with us.

“He has a good goal-scoring record in the Premier League and will bring a different dimension to our attacking options.

“I’ve no doubts he will prove to be an excellent addition to our squad.”

Stoke will be hoping Odemwingie will give them a lift at Sunderland, where they are 3.38 to take all three points. The Black Cats are 2.13 to record a home win, with the draw priced at 3.28.

Meanwhile, Jones has not signed in time to figure in Cardiff’s game against Manchester United tonight and will have to wait until the game against Norwich at the weekend before making his debut.

Ole Gunnar Solskjaer has now completed four deals since taking the reins at the start of the month but there are still more to come as he looks to drag the Bluebirds – currently priced at 1.95 to go down – away from relegation trouble, with Fabio and Wilfried Zaha set to arrive imminently.