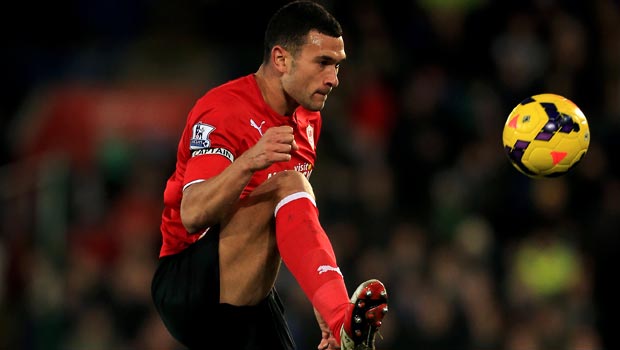 New signing Steven Caulker says he has arrived at Queens Park Rangers with the goal of making sure he doesn’t suffer relegation from the Premier League for the second successive season.

The 22-year-old completed his move to Loftus Road from Cardiff City on Tuesday, signing a four-year deal with the newly promoted side.

The English centre-half arrives in west London off the back of going down with the Bluebirds last term.

Caulker was one of a handful of players to come out of the season with his reputation enhanced and QPR moved quickly to bring him back to the capital.

The defender, who left Tottenham to join Cardiff 12 months ago, is looking to avoid a repeat of last season’s heartache and says his number one priority is survival.

“Our first aim this season has to be to get to 40 points, to make sure we stay up. That’s our first goal,” he told QPR’s website.

QPR are 2.80 to be relegated this season but will feel they have a good chance of avoiding the drop having added Caulker and former England international Rio Ferdinand to their ranks.

Ferdinand joined on a free transfer after leaving Manchester United and Caulker admits the chance to play alongside one of his idols persuaded him to make the move.

The former Tottenham youngster is also looking forward to working with manager Harry Redknapp again having been given his Spurs debut by the QPR boss when he was in charge of the north London side.

“I am very excited to be here. It was important for me to be back playing in the Premier League, and Harry Redknapp has given me the opportunity to be at this fantastic club,” Caulker added.

“Harry was a big factor for me, having worked with him at Tottenham. He was very keen for me to join and that was a big plus, knowing the manager wants you.

“Being able to play with Rio was also a big draw. He has been a role model of mine for many years, along with Ledley King. To have the opportunity to play alongside him was something I felt I couldn’t miss out on.”

Fellow Premier League newcomers Burnley and Leicester City are 1.55 and 3.20 respectively for relegation, while Hull City are 3.60.