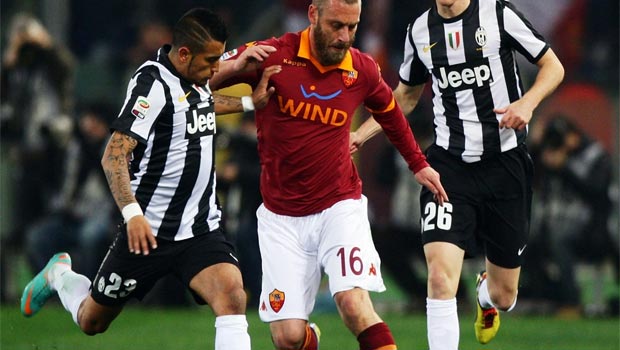 Juventus are nine points clear at the top of Serie A but second-placed Roma continued to stay in touch with another win at the weekend.

Despite not having vocal support from the closed north and south ends of the stadium, Roma were in determined mood against Sampdoria on Sunday evening, coming out on top 3-1.

The visitors held out until just before half-time when Mattia Destro headed home from a corner, and their fate was sealed when Miralem Pjanic curled in a brilliant free-kick on 54 minutes.

Destro quickly added his second three minutes later from close range, and despite pulling one back, Sampdoria became the ninth side to lose at Roma this season.

Goals from Kwadwo Asamoah, Claudio Marchisio and Fernando Llorente saw Juventus win 3-1 over Chievo to make it 11 wins out of 11 at home for the Turin club, and in truth, despite Roma’s persistent efforts, the Serie A title is Juve’s to lose.

Elsewhere in Europe, the La Liga race is the most competitive for years, with Barcelona, Real Madrid and Atletico Madrid all tied on 60 points.

The three sides all won at the weekend without conceding a goal between them, and for Barcelona fans in particular it was good to see Lionel Messi coming back to his best, the Argentinian bagging a brace in the 6-0 thumping of Rayo Vallecano.

It is not so close in the Bundesliga though, with Bayern Munich limbering up for Wednesday’s Champions League tie at Arsenal by destroying Freiburg 4-0 to stay 16 points ahead of nearest rivals Bayer Leverkusen.

That 13th successive league success saw Bayern extend their unbeaten run to 46 games, and it will be a brave man that backs against them on Wednesday, with the Bavarians 1.72 to emerge as winners on the night.