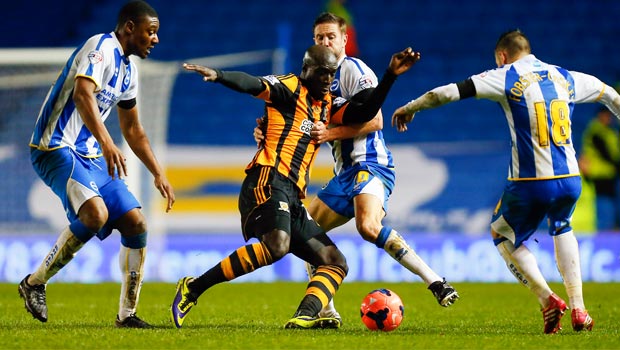 Championship side Brighton can set up a meeting with former boss Gus Poyet’s Sunderland by knocking Hull City out of the FA Cup on Monday night.

Poyet is now in charge at the Stadium of Light and Saturday’s draw saw his Black Cats paired with the winners of the fifth-round tie at the Amex Stadium between his old side Brighton and Hull City.

Steve Bruce’s outfit, despite having a poor away record this season in the Premier League, will nevertheless be fancied by many to come away with at least a draw.

However, the Seagulls are generally hard to beat on their own turf and to know that they are just one game away from the last eight for the first time since 1986 is a big incentive in itself.

Brighton have won their last four games at the Amex and have also won the last two FA Cup meetings with Hull, in 1985 and when reaching the quarter-finals the following year.

The good news for Brighton is that Hull strikers Shane Long and Nikica Jelavic are both cup-tied, with Sone Aluko standing by for a recall. He has only made two appearances as substitute though since coming back from an Achilles injury, and Gulls fans will hope he is not 100% ready to cause their defence too much trouble.

Coach Oscar Garcia has given the goalkeeping duties to Peter Brezovan over Tomasz Kuszczak in each of Brighton’s last two FA Cup wins – over Reading and Port Vale – and is likely to use him once again.

The Slovakian only joined in 2009 on a short-term contract but has been on the south coast ever since, and looks upon the FA Cup as a vehicle to showcase his talent.

Speaking on the club’s website, he said: “It is probably the most famous domestic cup in the world but any cup competition is good for players who don’t always play in the league.

“I’ve played a few games this season but obviously for any player it’s disappointing when you’re not in the team, but if you have an opportunity to play a game then it’s always great.”