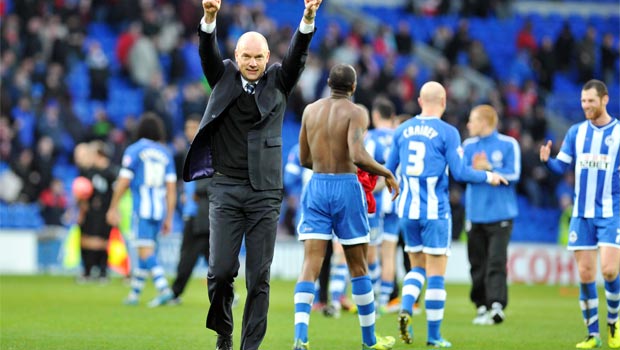 Wigan’s love affair with the FA Cup continues as the quarter-final draw sees them face Manchester City in a repeat of last year’s final.

The Latics famously beat their more illustrious rivals 1-0 at Wembley last May, with Ben Watson grabbing the only goal of the match, and after beating Cardiff City away on Saturday, their fans can once again dream of silverware.

Wigan were relegated last season and are now under the care of former City player Uwe Rosler, while that defeat for City proved to be Robert Mancini’s last game in charge, with Manuel Pellegrini now at the helm and it was he who plotted City’s 2-0 victory over Chelsea to set up the tie.

League One strugglers Sheffield United kept their hopes alive of a derby tie with city rivals Wednesday by coming from behind to knock out Nottingham Forest 3-1, that is providing Wednesday get past Charlton after their tie was postponed at the weekend due to a waterlogged pitch.

Liverpool may have been the better side at the Emirates on Sunday, but Arsenal’s 2-1 win put paid to a Merseyside derby, while Everton were flattered by their 3-1 scoreline over a makeshift Swansea outfit at Goodison Park.

Toffees boss Roberto Martinez is not too happy having been drawn away to face the Gunners, but is still optimistic.

“Obviously when you reach the sixth round you’re in a fantastic position to get a trip to Wembley and that’s what makes it exciting,” he said.

“The draw has not been too kind in terms of playing away from home, but we will embrace it and look forward to it.”

Matches to be played over the weekend of March 8/9.