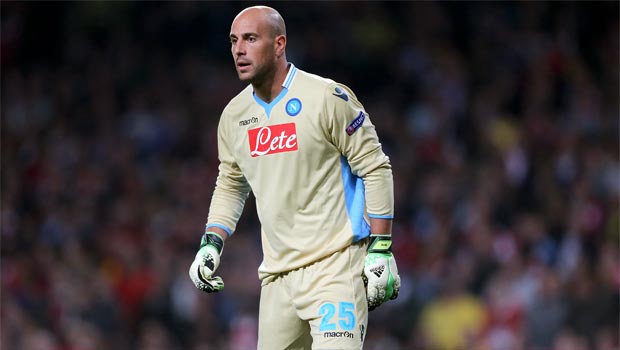 Napoli’s on-loan Liverpool goalkeeper Pepe Reina has admitted that would be happy to stay at the Serie A club beyond the end of the season.

The Spain international is on a season-long loan at Napoli where he has been reunited with his old Anfield boss Rafael Benitez.

But the 31-year-old keeper has revealed he would happily sign a permanent contract to remain with the Partenopei as they chase a top-three finish and glory in both the Coppa Italia and Europa League.

“I’m very happy here and my family’s happy too,” he told Piuenne television. “I’ll be here right to the end, but not even I know what will happen after.

“I’m here now, but I’ve got to return to Liverpool, although it’s unlikely I’ll stay there.”

Reina outlined the role his former Liverpool boss Benitez played in convincing him to choose the switch to Serie A after eight years in England.

“Benitez was the most important figure in me arriving here,” he added. “He convinced me to join this ambitious project at a great club.

“Obviously I also wanted to get to know a different league, while it was Liverpool who took the first step by not wanting me anymore because they were placing their faith in a younger goalkeeper.”

Napoli, available to back at 41.00, are 13 points behind leaders Juventus in Serie A and four points off Rome in second spot, who have a game in hand, so their chances of winning the Scudetto depend on their rivals slipping up.

Reina said: “We need to take things game by game, fighting on all fronts. Roma and Juve are not giving an inch, but now we’re thinking about Europe.
“Thirteen points is a long way to be behind Juve, but we’ve always got to think positively, regardless of them.

“It’s unlikely that they slip up now considering the pace they’ve sustained thus far, but it’s up to us to do the impossible. We play every competition to win it.

“Now we’re in the final [of the Coppa Italia], we want to win it, but we also know that Fiorentina are a great side.

“We’ve taken the first step, playing well against Roma and deserving to win and I’m delighted that we’re now so close to winning.”

Napoli are 1.6 to win the Coppa Italia in May with opponents Fiorentina 2.15 to lift the trophy.

Topics: Bet on Napoli, Bet on Serie A, Bet on Soccer, Napoli Betting