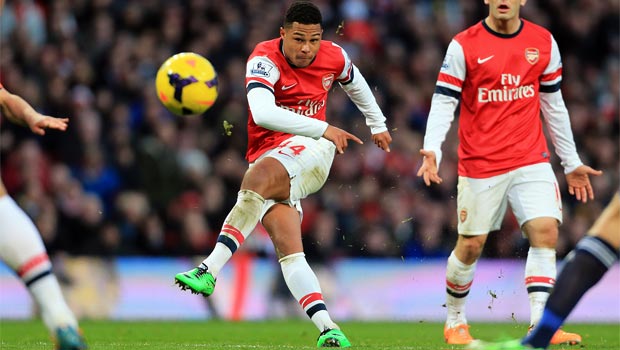 Arsenal star Serge Gnabry has turned his back on the chance to play for Ivory Coast and will represent Germany’s senior national team if the chance comes his way.

The Germany Under-19 international is a player that national team boss Joachim Low has been keeping an eye on this season when he has featured sporadically for Arsenal, starting twice in the FA Cup.

The 18-year-old winger has an Ivorian father and the African nation were rumoured to have been trying to win him over with the lure of a place at the World Cup finals in Brazil later this year.

But Gnabry has told Die Welt newspaper that his dream is to one day represent the Nationalmannschaft at the World Cup even if most believe he is not realistically in contention for the 2014 edition.

“I’ve played for the German age group national teams, so for me there was no question of it,” he said.

“I will definitely play for Germany. I hope that I can make my way into the senior selection.”

Former Stuttgart boss Low confirmed: “The boy is really good, he has exceptional qualities. We have an eye on him.”

Gnabry was born in Stuttgart and starred for their youth teams until Arsenal were able to sign him for £100,000 in 2010.

He didn’t feature for Arsene Wenger’s side on Sunday against Liverpool, but has previously started in the competition and believes a prolonged FA Cup run is good for his first-team chances.

“The FA Cup is a great opportunity for young players,” said Gnabry. “I really enjoy playing in the competition and I hope we make it to the final.
“We have got a chance, and it doesn’t matter who is still in the cup because in the end you have to play the best teams.”