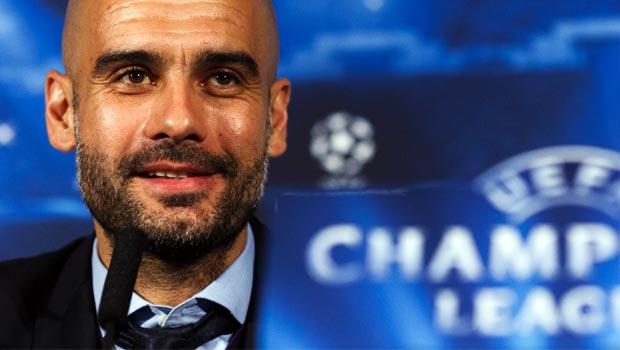 Bayern Munich coach Pep Guardiola sent out a message of caution to his players ahead of the Champions League last-16, first-leg tie in London, saying “you’ll never dominate such a well-organised team as Arsenal”.

The European champions are staying in the same hotel they used before last year’s 2-1 Wembley final win over Borussia Dortmund, but Guardiola is guarding against over-confidence in the Germans’ camp while club president Uli Hoeness echoed his sentiments that the tie is “a clash between equals”.

Guardiola had only recently been announced as the next Bayern Munich boss when he saw the Bundesliga giants destroy the Gunners at the Emirates at the same stage last year, taking what appeared to be an unassailable 3-1 lead back to Germany.

But Arsenal showed a never-say-die attitude at the Allianz Arena and were only eliminated on the away goals rule in the end, a result that gives Arsene Wenger’s side huge belief going into the rematch.

“You’ll never dominate such a well-organised team as Arsenal for 90 minutes,” said Guardiola. “It’s impossible. But it’ll be a good test for us and we’ll see where we stand in Europe.”

Thomas Muller, the scorer of Bayern’s second goal at the Emirates Stadium last season, issued a rallying cry prior to the reunion and called for a ruthless approach from the Champions League holders.

“We have to stand up to them,” said the Germany international, “Arsenal are doing really well in the title race. You can tell they have quality.
“We need to be equipped with our killer instinct.”

Goalkeeper Manuel Neuer remembers just how close Arsenal came to eliminating Bayern last season and warned his team-mates they have to be ready for a fast start from the English.

He said: “We were close to being knocked out. We have to be wide awake.”

Guardiola will field a close to full-strength side, with only defender Holger Badstuber and wingers Franck Ribery and Xherdan Shaqiri out.

Mikel Arteta is suspended for the Gunners while Theo Walcott, Aaron Ramsey and Kim Kallstrom are all injured.