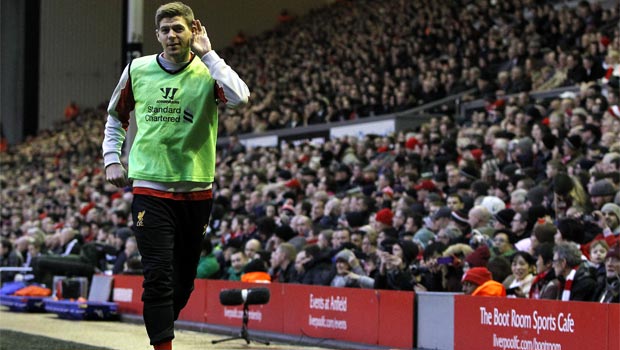 Liverpool manager Brendan Rodgers believes it was vitally important to get skipper Steven Gerrard back to full fitness as quickly as possible and says his influence on the squad is invaluable.

The 33-year-old had not featured since the 4-1 win over West Ham at the start of December before his cameo appearances against Hull City on New Year’s Day, the England international having been sidelined for four weeks with a hamstring injury.

In his absence the Reds went top of the Premier League temporarily before slipping down to fourth as a result of defeats to Manchester City and Chelsea.

If Liverpool are to achieve their goal of at least a top-four finish then it is crucial Gerrard remains fit and healthy, according to Rodgers.

“It’s vitally important to have Steven back,” the manager told liverpoolfc.com. “His influence in the team is critical for us.

“He’s worked tirelessly to get back having been out. We just wanted to get him some minutes on the pitch.

“He wasn’t ready to start the game, but his influence back in the team gives us another player of real quality.

“Over the course of the next 10 days, he’ll get right up to speed and it’s great to have him back.”

Rodgers’ squad has been stretched to breaking point over the recent festive period, and with the January transfer window now open the former Swansea boss admits he is thinking about adding some fresh faces to his squad.

The Northern Irishman has made it clear he will not be signing anyone just for the sake of it and only wants “quality” players at Anfield.

“We’ve just got to see what’s available. We know that we would like to strengthen the squad for the run in,” he added.

“So we just need to see what’s available and what that’s going to cost, basically. There’s no point in just stockpiling players for the sake of it. We need to bring in players of quality and hopefully we can do that.”