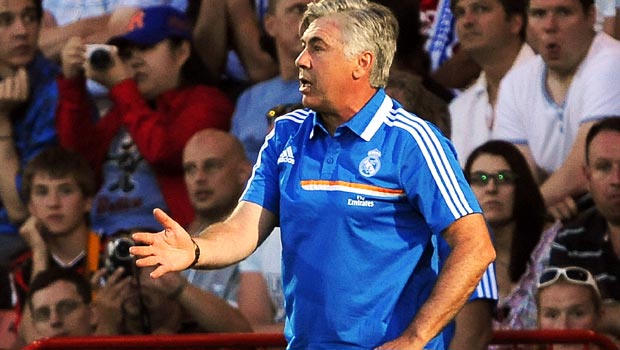 Real Madrid coach Carlo Ancelotti has told his team to play with intensity against Borussia Dortmund but Brazilian left back Marcelo has been ruled out of the Champions League quarter-final with a hamstring tear.

Ancelotti, although disappointed to lose his first-choice option in the position, will have no problem in naming Portugal international Fabio Coentrao in his line-up on Wednesday night and dismissed the notion of playing Gareth Bale at left back.

“We have a good replacement for Marcelo, Coentrao has the experience and he’s fresh for this game,” he said.

“There is no change. Coentrao has done the same work as Marcelo.”

Ancelotti played down Real Madrid’s recent slips in La Liga and emphasised his side’s unbeaten record in the Champions League.

He added: “We are the only team that has not lost in this competition and the team is ready to give one hundred percent. The team is ready, and when I said the atmosphere is good I meant the fans will make a good atmosphere too and they will help us.”

The Bernabeu crowd did get on the back of superstar Cristiano Ronaldo on Saturday, but Ancelotti said the incident had been forgotten and that his match-winner was fully fit after a slight knock.

“Cristiano’s knee is fine, better than last Saturday’s game,” he added. “He’s motivated, the whistles are forgotten…Cristiano is giving it all.”

Lukasz Piszczek was an unused substitute at Stuttgart on Saturday, having suffered from muscular problems in the build-up, while goalkeeper Roman Weidenfeller and striker Pierre-Emerick Aubameyang featured despite colds.

Ancelotti revealed that his squad were coping well with the physical demands of fighting out a very tight domestic title race and attempting to win their 10th European Cup.

He said: “The team is very well physically. We’re going to try to play a game with great intensity, we need to do this to find offensive solutions. I am not worried because what we need is just that, not slowing down.”