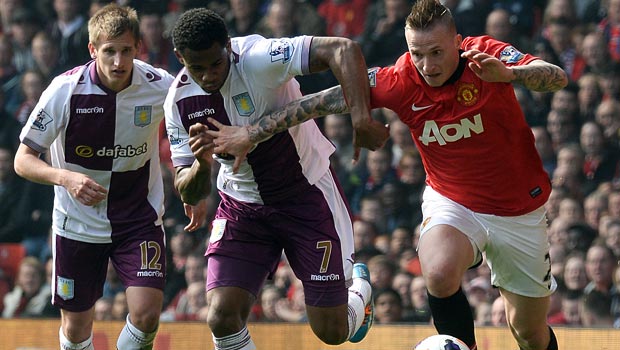 Manchester United defender Alexander Buttner believes that Tuesday’s
1-1 draw with Bayern Munich in the Champions League gives the Premier League side a real opportunity of securing a place in the semi-finals.

The Red Devils led the defending champions at Old Trafford courtesy of a Nemanja Vidic header from a corner delivered by Wayne Rooney in the 58th minute.

However, David Moyes’ side were under pressure from the first whistle and conceded 74 per cent of the possession, a dominance eventually paying off as Mario Mandzukic headed down for Bastian Schweinsteiger to fire an equaliser into the top corner in the 66th minute.

Despite being on the back foot for large periods of the fixture, Buttner – who started due to Patrice Evra’s suspension – insists that they proved that they can dig in when it gets tough, and can progress at the expense of the holders.

Buttner said: “Of course we can do it. We always believe in ourselves.
We had chances to score more goals and we have to focus on that.
Defensively, we did well, we didn’t give a lot away, just a goal, and I think we have a good chance.”

The former Vitesse Arnhem man admitted that it was nice to get the opportunity to perform for Moyes on a difficult night and he was happy with his performance against a tricky winger in Arjen Robben.

He added: “It was nice to play. For me it was my first big game and I think I did well. We know they can play good football and for myself I defended well against one of the best wingers. It’s good to play a good game.”

The German outfit have been in impressive form domestically this term and claimed the title for a second successive season by beating Hertha Berlin on March 25.

However, Bayern who are 1.23 to win the return leg in the 1X2 betting have slipped up twice at the Allianz Arena against English opposition in the Champions League this season with Manchester City claiming a victory and Arsenal coming away with a draw.