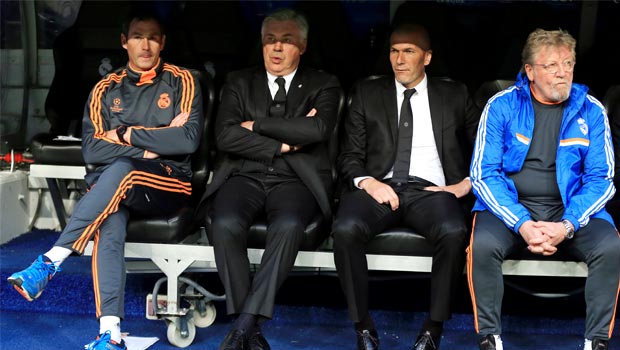 Real Madrid manager Carlo Ancelotti has urged his squad to put the Champions League return leg in Germany to the back of their minds as they prepare to take on Osasuna in the league.

Los Blancos claimed a hard-fought 1-0 victory at the Santiago Bernabeu on Wednesday to put them in the driving seat for the second leg of the semi-final at the Allianz Arena.

Ancelotti had some injury concerns ahead of the European tie with Cristiano Ronaldo passing a late fitness test, while Gareth Bale had to settle for a place on the bench after suffering a bout of illness in the week.

After successfully manoeuvring through a tricky tie against the defending champions and moving one step closer to the final in Lisbon, the Italian tactician has called on his players to switch their focus back to La Liga.

The Madrid-based side head into this weekend’s round of fixtures in third place, six points adrift of leaders Atletico Madrid and two behind Barcelona but with one game in hand over their two rivals.

The former Chelsea boss is keen to avoid any slip-ups in what should be a straightforward match as he aims to keep the club on track for a treble in his debut campaign after already claiming the Copa del Rey with a 2-1 victory over Barcelona.

Ancelotti said: “We are trying to get our energy back. We have to focus because we are in the fight for La Liga. The goal is to win every game until the end.

“It’s not easy because we exerted a lot of energy against Bayern, but now we’re trying to recover it.

“I’m not thinking about Tuesday. We have a very important match against Osasuna and we have to try and win tomorrow. It’s very important for the league.”

The 54-year-old also suggested that he may look to shuffle the pack slightly in order to allow certain players to rest and help restore energy levels.

He added: “Benzema is carrying a problem. I’ll probably play Morata, who is in good form and working well. He’s done very well when he’s had game time and scored goals. I’m confident he can put in a great performance.”