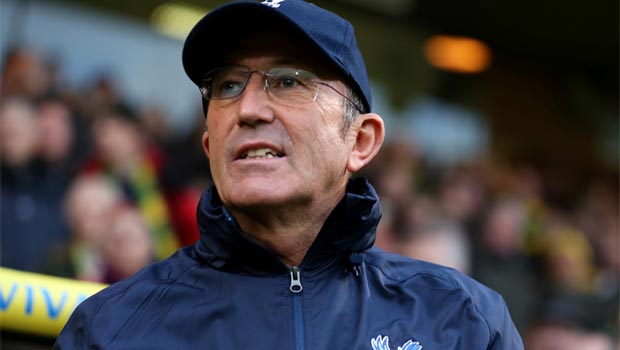 Crystal Palace boss Tony Pulis has indicated he is ready to dive into the January transfer market in order to help the club stay in the Premier League.

The Eagles were the favourites to be relegated this season following their promotion from the Championship – and before Pulis took over they looked destined for the drop.

However, under the Welshman, the south London club have shown some fight, moving off the foot of the table and out of the relegation zone for a time.

The New Year’s Day draw with fellow strugglers Norwich saw Crystal Palace slip back into the bottom three, but Pulis says he isn’t paying any attention to the table with so much of the season still to go.

The former Stoke boss claims his current focus is on improving his squad at Selhurst Park now the transfer window is open for business again.

A host of players have been linked with a move to Palace since Pulis took over, with Blackburn defender Scott Dann and Celtic midfielder Joe Ledley the latest names mentioned in connection with the Eagles.

Pulis is keeping his fingers crossed that a combination of new arrivals and Palace’s home form may be enough to keep the club in the Premier League.

“We mustn’t lose games at home, but the conditions played such a big part today. It was as difficult a game that I’ve seen for a long time,” he said after the draw with the Canaries.

“It’s another point. The next couple of weeks are big in respect of recruitment in terms of what we can bring in and let go.

“If we can do some business that’ll help us. We know what players we want to bring in. Out of respect, we’ll keep them close as always.”