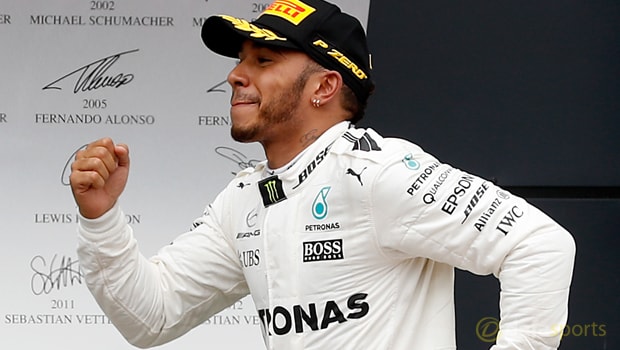 Lewis Hamilton believes Mercedes have caught Ferrari up and the two championship rivals are now neck and neck at the halfway stage of the 2017 Formula One season.

The German, who is 2.50 to win a fifth Drivers’ Championship, also came out on top in Monaco and three runner-up finishes at China, Russia and Spain had built a healthy lead in the early stages of the season.

However, since the success on the streets of Monte Carlo, the Scuderia have failed to pick up another win and this has allowed Mercedes to get their title defences back on track.

Hamilton ended up first in Canada and Britain whilst team-mate Valtteri Bottas clinched victory in Austria, extending the Silver Arrows’ lead over Ferrari in the Constructors’ Championship to 55 points.

The British star is also just one point behind leader Vettel in the individual standings after the recent success at Silverstone and the fight looks like it will go right down to the wire.

“I think there are pros and cons between both teams in terms of performance,” Hamilton said. “Some weekends they’re just a little bit ahead of us, and other weekends [we are ahead of them], so I think it’s track dependent.

“At the moment, they’ve had the strongest package and that’s why he’s still one point ahead I guess, but I think collectively as a team we are still leading the constructors’ championship so I guess we’ve been gaining points.

So it’s kind of level.” Hamilton is the 1.53 favourite to win a fourth world title whilst Mercedes are leading the betting at 1.08 to retain the team crown, ahead of Ferrari who are a 6.00 chance.