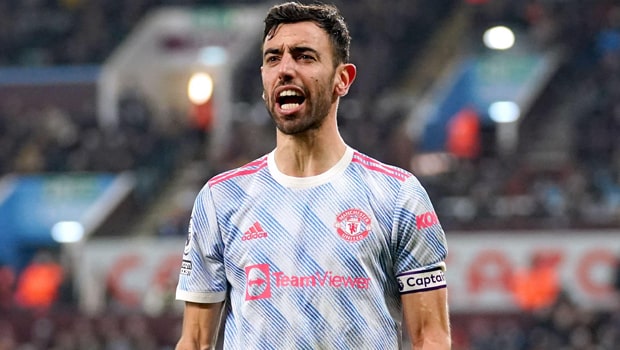 Former Manchester United defender Paul Parker reckons that Bruno Fernandes actions and behaviour on the pitch is not ideal and a lot of his team’s players don’t like him. It has been noticed that Fernandes can get a bit frustrated if things don’t go his way and Parker believes the Portuguese midfielder lacks humility on the pitch.

Meanwhile Bruno Fernandes hasn’t been in the best of forms in the ongoing season. However, Fernandes scored a brace against Aston Villa in the team’s last game at Villa Park but his efforts went in vain as the home side bounced back stronger in the last 15 minutes to equalise and share the spoils.

“Fernandes is a concern for me,” Paul Parker told Talk of the Devils podcast. “Just watching him and the way he portrays himself on the pitch, I’m sure there are players within that squad that don’t like him and what he does on that pitch.”

Parker added: “He brings too much attention to everything while he puts in a bad tackle and he’s telling people to get up. He gets tackled himself and he rolls around, and he wants to show he’s got a nick on his sock or something.”

Parker recalled an incident in the last game when Aston Villa’s Ollie Watkins tried to help Bruno Fernandes but the midfielder was disrespectful in his actions.

“Watkins tried to help him up the other day. He’s a lovely lad, no malice in him. He felt he didn’t do anything and he tried to get him up, wasn’t rude to him and he (Fernandes) pushed his arms up into his face and was very disrespectful to him. All that adds a bit.”

It has been reported that Fernandes has rejected Manchester United’s contract extension offer. Fernandes current contract lasts until 2025 and it can be extended by a year.

Speaking on the same, Parker added, “Where are you going to go?” he continued. “Where have you been prior to coming to United where you have had all this around you?”.

“No one out there really wanted him. United have grabbed hold of him. I can understand why other clubs haven’t gone to him, I think there is a little bit about him personally that has maybe kept people away.”

Parker added: “Because when you look at him as a footballer you ask, ‘why has he not played for these big clubs around Europe?’ United have grabbed hold of him and made a career out of him.”

Bruno Fernandes has thus far played 106 matches for Manchester United in which he has scored 47 goals and has also provided 34 assists.