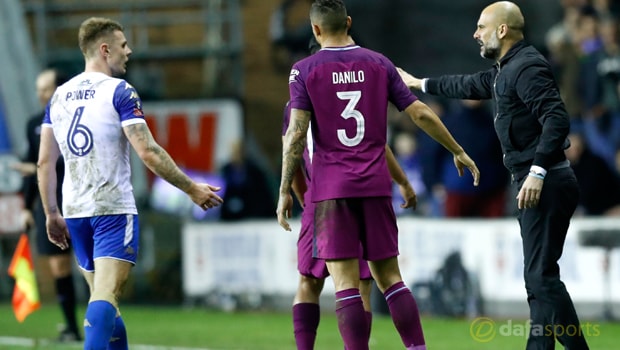 Pep Guardiola insists he cannot fault the effort of his Manchester City players after they were knocked out the FA Cup by League One Wigan Athletic on Monday.

Will Grigg’s 79th-minute goal was enough to hand the Latics a 1-0 victory and, in doing so, end City’s hopes of claiming an unprecedented quadruple.

The Citizens’ cause was not helped by the sending off of Fabian Delph on the stroke of half-time, an incident that led to tempers becoming frayed in both dugouts, although Guardiola ultimately accepted referee Anthony Taylor’s decision.

The Spaniard was also quick to congratulate Wigan during his post-match press conference, although he was pleased with the application of his own players, even if they could not secure the result they were looking for.

“I judge my team for the intentions, not for the results,” he said. “The intentions during the season, even today, were good.

“We tried, 10 against 11, we created chances. Their keeper was good, we could not finish. Mentally it is hard fighting in four competitions and we did it.

“The intentions were good and, after that, the result speaks for itself. 1-0 – congratulations to Wigan. Normally when I lose, my first words are always for the winner.”

Guardiola is confident, however, that City will be able to bounce back from the defeat, as they proved following their loss to Liverpool last month that they are capable of respnding to a setback.

He added: “It [defeat] happened against Liverpool, it happened today, it will happen again. Congratulations to Wigan, all the best for the future.”

City are next in action when they take on Arsenal in the Carabao Cup final on Sunday.

The Citizens are priced at 1.57 to secure a victory from that match during regulation time, while Arsenal are available at 5.50 and the draw is on offer at 4.33.