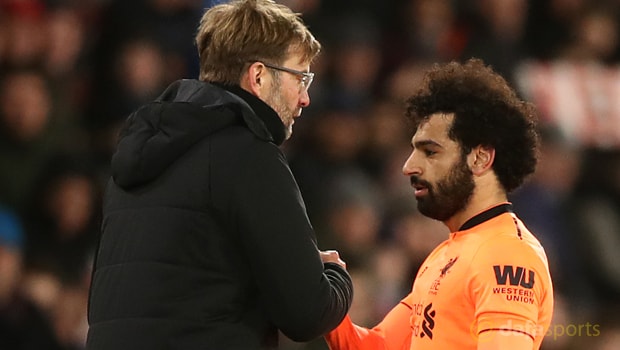 Mohamed Salah believes the tactical nous of Jurgen Klopp is one of the main reasons he is enjoying such an impressive first season with Liverpool.

The Egyptian international has been a revelation since joining the Reds from Roma last summer, as he has netted 30 goals across all competitions, including 22 in just 26 Premier League appearances.

The 25-year-old has received widespread acclaim for his performances throughout the campaign, but he has been quick to attribute a lot of the credit to Klopp, who has utilised him in a more attacking role since his arrival on Merseyside.

“With the boss here, I play a little bit closer to the goal, more so than at any other club or more than any of my other coaches have asked me to,” Salah told Liverpool’s matchday programme.

“So I am always in front of the goal to give me the opportunity to score. The manager is always telling me to stay close to the goal in training.”

Despite his impressive form, Salah insists there is still room for improvement in his game and he is working hard on the training pitch to become even better.

“You cannot score 10 goals from 10 balls – that’s impossible and I know that I have missed many chances too this season. But I am trying to improve,” he added.

The coaches help me so much to do that and I also work hard alone after the training sessions.”

Salah will be hoping to add to his goalscoring tally when Liverpool play host to West Ham in the Premier League on Saturday.