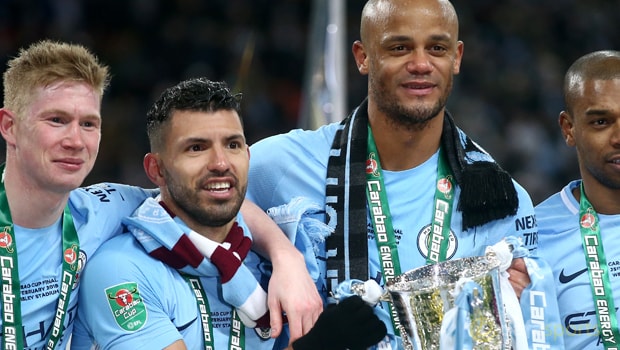 Manchester City midfielder Kevin De Bruyne says it is a great feeling to win the League Cup and wants it to be the start of a potential treble this season.

Pep Guardiola picked up his first piece of silverware since arriving at the Etihad Stadium in the summer of 2016 as the Citizens blew away a lacklustre Arsenal at Wembley on Sunday.

Argentina international Sergio Aguero opened the scoring in the first half with a deft chip before captain Vincent Kompany, back in the starting line-up, made it 2-0 when poking home Ilkay Gundogan’s initial shot.

Spanish midfielder David Silva then put the cherry on the cake with a brilliant finish as City ran out comfortable 3-0 winners in what was an excellent response to their shock FA Cup exit at the hands of Wigan.

The quadruple may not be on now but the treble is still a possibility for the blue half of Manchester, who are 13 points clear in the Premier League with 11 matches remaining.

City are also on the verge of advancing into the Champions League quarter-finals, having beaten Basel 4-0 in the first-leg, and De Bruyne is hoping to secure more silverware this season.

“It is very nice to win but it is just the beginning, we still have a lot to play for and Thursday is another game,” he told ITV Sport.

“It is very nice to already have a title in the bag, we have had a wonderful season until now and I think we fully deserved it.

“Now we have to go on and try to win the Premier League and do well in the Champions League.”

City take on Arsenal in the Premier League on Thursday at the Emirates and the visitors are firm 1.80 favourites, a draw is priced at 3.80 while the Gunners are 4.50 outsiders.