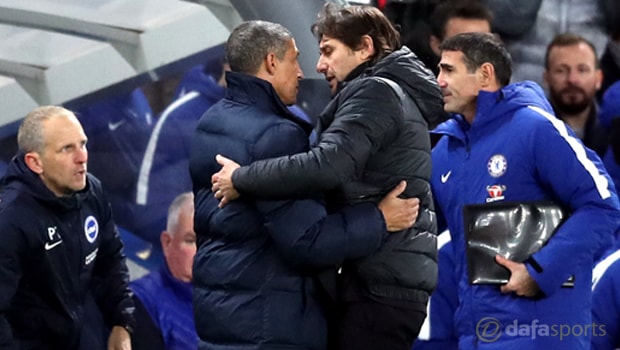 Chelsea manager Antonio Conte feels his team are not getting enough luck this season to stay in the title race.

The Premier League champions overcame Brighton 2-0 at Stamford Bridge on Boxing Day thanks to second-half goals from Alvaro Morata and Marcos Alonso.

It was Chelsea’s sixth straight home success but it could only move them to within 13 points of record-breaking league leaders Manchester City.

Pep Guardiola’s team are doing something “extraordinary” this season, admits Conte, and will be further clear if they defeat Newcastle in their game in hand on Wednesday.

Chelsea however have not enjoyed the rub of the green, according to their manager.

“This season is different to last season,” said Conte “Last season a lot of times we won games and were a bit lucky – like against West Brom here, Sunderland.

This season sometimes we could have more luck.

“We have great respect for Manchester City because they are doing an extraordinary thing.”

Brighton frustrated the champions for 45 minutes but the Seagulls were caught napping within 50 seconds of the second half starting, Morata heading home a cross from Cesar Azpilicueta.

Alonso headed Chelsea’s second goal, their 12th headed goal already this season – more than any other side in the Premier League.

Conte felt his team merited the victory on their second-half showing.

“In the second half we settled very well and created many chances,” he added.

“It was a good performance with good intensity.”

Chelsea are 1.22 to finish in the top four this season and 1.18 to defeat Stoke in their next game on Saturday.