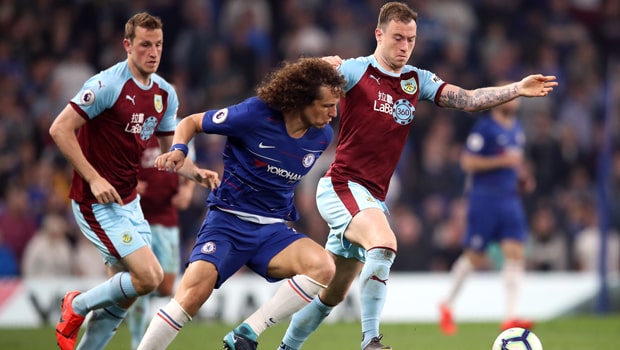 Gianfranco Zola and David Luiz were quick to point the finger at Burnley’s approach following a 2-2 draw at Stamford Bridge on Monday night.

The point lifted Chelsea into the top four but they only lead Arsenal by a single point and the Gunners have a game in hand. Victory would have seen the Blues leapfrogging Tottenham into third spot.

All the goals were scored in the opening 24 minutes, with Jeff Hendrick scoring first for Burnley before N’Golo Kante equalised. Gonzalo Higuain netted to put Chelsea ahead although Ashley Barnes levelled from close range.

Burnley were clearly happy to stall the game afterwards, with Tom Heaton earning a yellow card in the 32nd minute – the earliest a goalkeeper in the Premier League has been booked for time wasting in a game for five years.

Maurizio Sarri was sent to the stands late on as tempers flared on the touchline and Zola felt the referee Kevin Friend didn’t add on enough time to compensate for Burnley’s tactics.

“Five minutes injury time wasn’t enough to compensate,” Zola told BBC Sport. “We expected it to be a tough game. We didn’t expect so much time-wasting. We expected the referee to give more extra time. That’s why we’re very unhappy.”

Luiz was involved in an altercation with Barnes and the Brazilian didn’t hold back in assessing the Clarets after a frustrating night at Stamford Bridge. “It’s anti-football,” Luiz told Sky Sports.

“Losing time all the time, especially when you have the ball. Their players went to the floor and stopped the game.

Chelsea travel to Manchester United on Sunday and they are 2.60 to win, while the Blues are now 2.38 to secure a top-four finish this season.