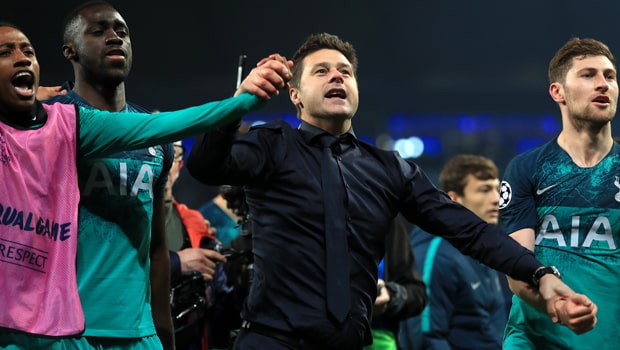 Spurs have won all three games at their new stadium so far and, if they make it five, they’ll be close to securing a top-four finish.

They’ve got a Champions League semi-final against Ajax looming but Pochettino knows just how important it is for his side to ensure they are in line to play among Europe’s elite again next season.

A 1-0 defeat to Man City on Saturday was tough on Spurs but they’ll expect to bounce back against a Brighton side that hasn’t scored in five games.

“It is in our hands to be in the top four and the Champions League next season. Our next two games are decisive, if we can win them, it will depend on us,” Pochettino said.

“Now it is time to be strong and be competitive [against Brighton] and take the three points.”

With Arsenal and Manchester United losing on Sunday – and Chelsea held by Burnley on Monday night – Pochettino’s side remain third in the table.

The energy of their new home has so far proved a positive for Tottenham and that must continue, says the Spurs boss, who is confident that nobody in the dressing room is thinking about Europe.

“We hope we can keep going, getting the same result,” he said.

“It is going to be fantastic and it is going to be helpful for us playing in the new stadium with our fans, and we hope and wish to repeat the performances of the previous results.

“We are not thinking of Ajax. We showed that [against Man City]. Now our energy is in Brighton.

“It is so clear that we have two objectives – one is to be in the top four at the end of the season and the other is to beat Ajax, but we need to go step-by-step.”