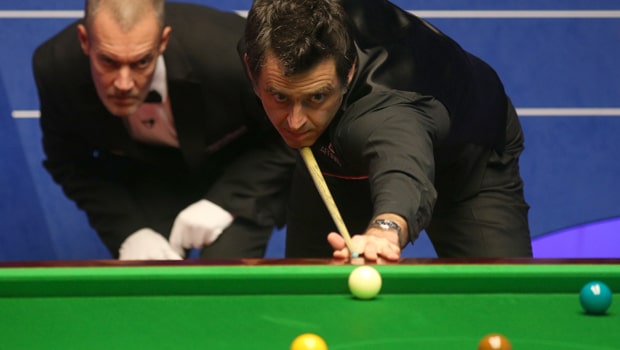 The world number one and five-time Crucible champion produced some uncharacteristic errors on Monday as debutant Cahill refused to be daunted inside snooker’s most iconic arena.

O’Sullivan has been in imperious form this term, winning five of the 10 tournaments he has contested, reaching seven final, and regaining top spot in the world rankings.

He won a record-breaking 19th Triple Crown event at the UK Championship in December and became the first player to make 1,000 century break at the Players Championship.

He must win six of the last 10 frames when they resume on Tuesday at 10am if he is to avoid one of the biggest shocks in Crucible history.

The early signs were there as O’Sullivan failed to take his chances in frame one and, following a safety exchange, Blackpool’s 23-year Cahill deposited a superb long black to win 68-67.

O’Sullivan replied with breaks of 51 and 86, seemingly finding his range with long pots and sublime touches, to go 2-1 up, but Cahill’s 71 left them all square at the interval.

They traded the next two frames before Cahill looked destined to reclaim the lead at 4-3, only for O’Sullivan to escape a snooker he’d inadvertently laid on himself when potting the yellow as he hid the green.

Cahill’s swerve escape failed and O’Sullivan cleared the six colours to edge in front again. A break of 54 helped Cahill take the eighth for 4-4 and the final frame of the session also went his way as O’Sullivan missed a pair of makeable pots in surprising fashion.

Cahill is 4.50 to sustain his advantage and dump O’Sullivan out on Tuesday, while ‘The Rocket’ is 4.00 to turn things around and win 10-7.