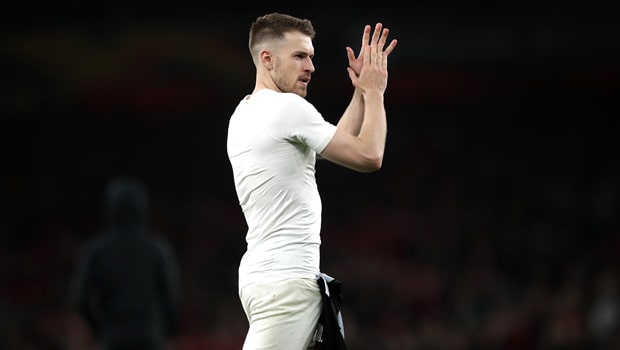 Wales boss Ryan Giggs is confident that midfielder Aaron Ramsey will emulate Gareth Bale and take his game to another level when he joins Juventus.

The Arsenal man has decided to move on from Arsenal, although he will of course remain at the Emirates Stadium until end of May.

After signing a pre-contract agreement with Juventus, he will officially become their player on July 1 and Giggs expects Wales to benefit from the move.

The 28-year-old could now emulate Bale’s achievements for Wales, with the former Tottenham man making a similar move six years ago.

Bale has scored over 100 goals for Real Madrid and won four Champions League titles, and Giggs is excited by Ramsey’s future. “You’ve seen what it [going abroad] has done for Gareth,” said Giggs.

“It will be a great experience for Aaron and he is going to a great club, the biggest in Italy.

“Look at the facilities Juventus have got, they are a massive club. He is playing well at the moment and [leaving Arsenal] has not affected him.”

Both players have been named in Giggs’ latest squad for the European Championship Qualifiers, while 18-year-old Rabbi Matondo is also in the squad just months after moving to Schalke from Manchester City.

Matondo is expected to earn his second cap against Trinidad & Tobago in Wales’ next friendly before then potentially playing in the 2020 European Championship clash against Slovakia in Cardiff.

Giggs is predicting an exciting future for the teenager with his pace set to cause chaos in the qualifying campaign.

He added: “He has electrifying pace and that always keeps you interested. Obviously after that you have to develop. “If a full-back works you out you have to have that Plan B, but he can hurt teams.”