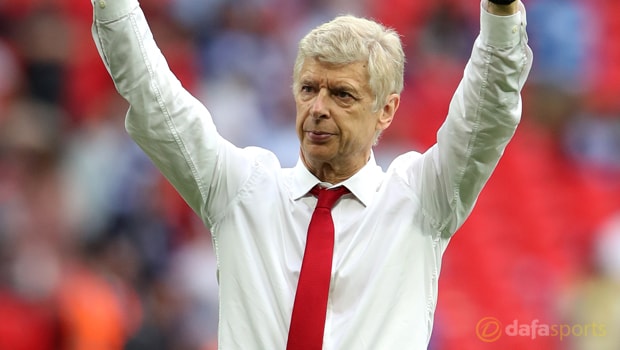 The Arsenal squad are relieved to finally know manager Arsene Wenger is staying with club for two more years, according to Aaron Ramsey.

Major uncertainty surrounded Wenger’s future during last season, with the Frenchman’s contract due to expire this summer.

In the aftermath of their FA Cup final triumph over Chelsea, it was announced that Wenger was being given a two-year extension on his deal and midfielder Ramsey says it came as a relief for the players.

But the news that Wenger’s 21-year stint as manager was being extended was welcomed, insists Ramsey, who says the entire squad is behind their manager and determined to give him the title push he craves next season.

“It is hard when all that speculation is going on,” Ramsey told a press conference. “As a player, you try to put it to the back of your mind, but obviously you are not sure what is happening.

“We’re glad now that it has finally been announced he’s staying. We’re all happy.

Hopefully now we can start the season strongly and have a real good go, not just for ourselves, but for him as well.”

Arsenal have not been Premier League champions since 2004, the third title of Wenger’s career in England.

They have won three of the last four FA Cup finals, but have not been able to sustain a title challenge in recent seasons. The Gunners are 13.00 to end their title famine next season.