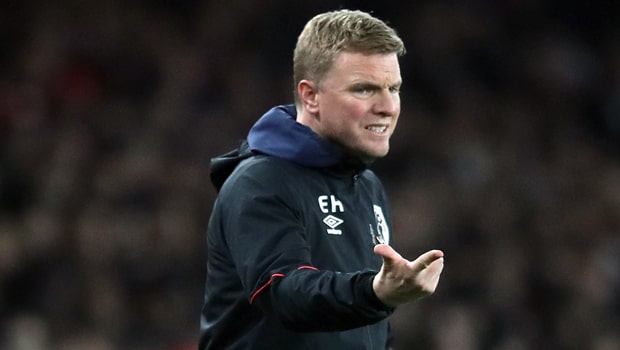 Eddie Howe is demanding much more from Bournemouth ahead of Saturday’s visit of title-chasers Manchester City.

The Cherries were thumped 5-1 at Arsenal on Wednesday evening, their ninth successive away league defeat since a win at Fulham back in October.

Howe has been playing down the run, insisting the problem is Bournemouth’s need to find consistency in their play, irrespective of where the games take place.

They faced strong opponents in Arsenal but, with Pep Guardiola’s champions next up at the Vitality Stadium, Howe says his players have to take responsibility for their own performances.

“Arsenal did have individuals who played well and they were too good for us. But that mindset takes away ownership of what we delivered with our own team,” Howe said.

“They may have played well but our perspective is clear that we can do so much better and are capable of much more than that.

“We will not kid ourselves and our analysis has to be that it was not acceptable.” Bournemouth go into the weekend in 12th spot, nine points above the relegation zone with just 10 matches remaining.

Their manager isn’t taking survival for granted and has told his players they cannot ease off in any scenario.

“We’re always looking over shoulder because we need points and we need results,” Howe added.

“Whether we are safe or not, we need to pride ourselves on being our best and we were way short of that [against Arsenal].”