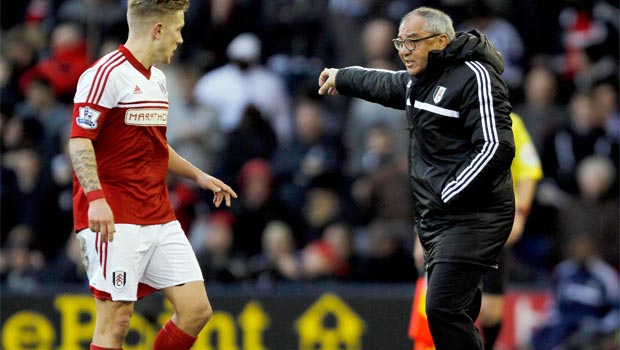 Fulham winger Alex Kacaniklic is enjoying working under Felix Magath and believes the German tactician is the man to guide the club to Premier League safety this season.

Magath has become Fulham’s third manager of the season after replacing Rene Meulensteen, who in turn took over from Martin Jol, and he has 11 games left to try and rescue what has been a disastrous season for the west Londoners.

They currently sit rock bottom of the table and face the daunting task of welcoming high-flying rivals Chelsea to the Thames on Saturday.

But all is not lost as they are only four points from safety and there are probably still eight or nine clubs fighting the drop.

Bringing in a new manager can sometimes give a team a lift and Kacaniklic certainly feels that is the case with Magath, who has impressed the Swede.

“There has been a good pace in training and you can see that we have got a new boost,” he said. “I have got a positive impression of him. His ideas about football appeal to me.

“All of the players are determined to fight to keep us up and I am convinced we will manage to do that.”

Fulham are without a win in seven top-flight matches and can be backed at 6.87 to win the game while Chelsea, who are priced at 1.48 to take all three points, are unbeaten in 12 outings and it looks set to be a tough afternoon for Magath’s charges.

Record signing Kostas Mitroglou is in contention to make his first Cottagers start since signing from Olympiacos in January, with Hugo Rodallega possibly making way.

Scott Parker and Brede Hangeland are likely to be retained while, for Chelsea, Samuel Eto’o is likely to get the nod up front with Nemanja Matic in midfield.