Premier League: ‘Chelsea not back in title race’ – Jose Mourinho 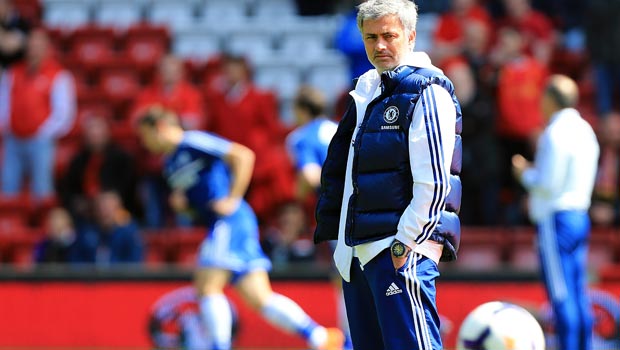 Jose Mourinho has dismissed Chelsea’s chances of winning the Premier League title and says it is a two-horse race between Liverpool and Manchester City.

Mourinho has played down Chelsea’s chances throughout the season, but they still remain in the hunt following Sunday’s 2-0 victory over Liverpool at Anfield that moved them to within two points of the Reds.

Chelsea are the outsiders of the three challengers and are priced at 16.00 to go on and win the title, and Mourinho seems to agree with such odds.

When quizzed about Chelsea’s chances, Mourinho said: “We’re back in nothing. At this moment we are almost third. With Everton’s defeat (on Saturday) we were automatically qualified for the Champions League.

“Now with these three points we need one point to finish third. Champions are only one (team) and the champions will be City or Liverpool.”

Mourinho had one eye on the Champions League semi-final, second-leg clash with Atletico Madrid, which will be played on Wednesday night, and made a host of changes at Liverpool.

Despite coming up against a Liverpool side who had won 11 games on the bounce, Chelsea produced a masterclass in defensive and counter-attacking football to snatch a 2-0 win.

Mourinho had nothing but praise for his players and says all attention now turns to the Atletico game.
“We played a good side,” Mourinho said. “Many people would be expecting us to come here and lose three, four or 5-0 like many others did.

“When people know our focus was on Wednesday, probably many people think it’s impossible to get this kind of result.

“Now we have to think about Wednesday, and I would say the game of our lives. To play a Champions League semi-final at Stamford Bridge is something big.”