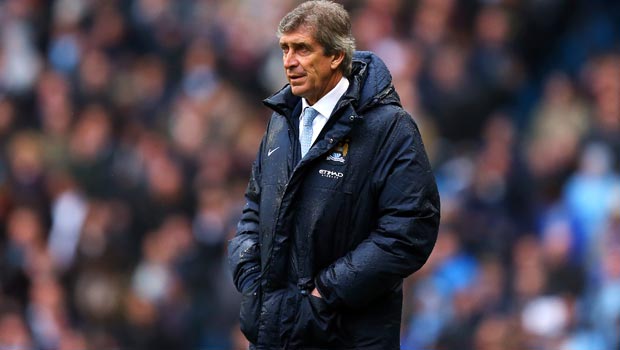 Manuel Pellegrini insists Manchester City are not the favourites to win the Premier League despite the title race swinging back in their favour following the win over Crystal Palace and Liverpool’s defeat to Chelsea.

Two weeks ago the Reds became hot favourites to win the title after defeating City 3-2 at Anfield but, following Sunday’s results, it is Pellegrini’s men who now hold the advantage.

Even if Liverpool win their last two games, City could take the title on goal difference if they win their remaining three.
It will not be easy, especially with a trip to Everton on the horizon, but City supporters will be feeling more confident after Sunday afternoon.

Even so Pellegrini is playing down their favouritism and still believes Liverpool are in the box seat, while Chelsea, who sit in second place two points behind Liverpool, cannot be discounted either.

“No advantage now, no, but it depends what we can do in the future, that’s very important,” said Pellegrini.

“For the moment we’ll continue in third position, so we have to play and win our three games.

“But the good thing is that the destiny is in our own hands at the moment.

“We have to remain focused on ourselves, and in every single match. We are not thinking about goal difference, we are just thinking about how to beat Everton next week.”

The return of Yaya Toure from injury will also be a huge boost for City after the influential midfielder scored the second goal to add to Edin Dzeko’s opener at Selhurst Park.

City are 1.78 favourites to go on and win the title, with Liverpool currently priced at 2.25.