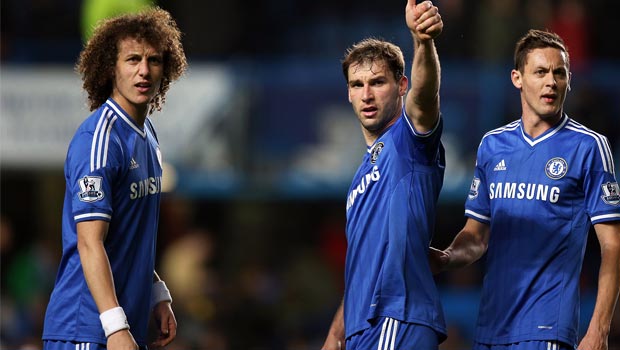 Chelsea star David Luiz says he is loving the pressure his side are under in their attempt to win the Premier League title this season.

The race for the English crown looks like it could go right down to the wire, with Chelsea, Manchester City, Arsenal and Liverpool all pushing for the title.

Chelsea, who are 2.45 to be crowned champions, currently lead the way, despite manager Jose Mourinho claiming the Blues are building for next season and won’t be in the running this term.

A war of words has been struck up between Mourinho and Arsenal boss Arsene Wenger over the past few days and the subject of ‘failure’ has been high on the agenda.

But while the bickering of managers and talk in the media rumbles on in the background, Luiz says he is loving the tension.

The Brazil international has insisted he is thriving off the pressure and hopes he and his team-mates can really do something special this season.

“We are not afraid, we are top of the league now, we are happy with this. We keep working hard every day. Of course I respect everyone, every team, but we need to do our job.”

Chelsea will be looking to maintain their spot at the top of the Premier League table when they face Everton at Stamford Bridge on Saturday.

The Londoners are 1.55 to secure all three points, whilst the Toffees can be backed at 5.85 to come away from the capital with the spoils.