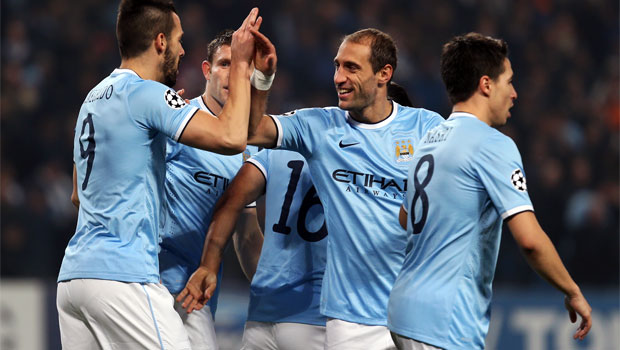 Manchester City boss Manuel Pellegrini admits he is setting his sights high in Europe after watching his side beat CSKA Moscow on Tuesday to qualify for the last 16 of the Champions League.

The former Premier League champions failed to get out of the group stage in their past two ventures into Europe’s elite club competition but have breezed into the knock-out stage this time around with two games to spare.

The north-west outfit have won three of their four fixtures, with the only blemish being the footballing lesson they received in defeat to champions Bayern Munich.

Alvaro Negredo notched a hat-trick and Sergio Aguero scored twice as City thrashed the Russians 5-2 at the Etihad Stadium to sit on nine points, with games against Bayern and Viktoria Plzen still to come.

Pellegrini was full of praise for the way in which his men have risen to the occasion this season and made it clear that they will not just settle for a place in the next stage.

“You can see from the last two years it is not easy, and yet two games before the end we are in the round of 16,” he said. “The minimum target is to qualify for the next round, but it is not our only target.”

City have a squad packed full of world-class players but they were taken apart by the Bavarians on match day two.

But despite that setback, the Chilean tactician believes that none of the other 15 teams that qualify will want to be paired with his charges in the New Year.

“We have a strong team, we have a strong squad, we will see who we will play in February,” he added. “But I can assure you they will not be very happy to play against us. No one will.”